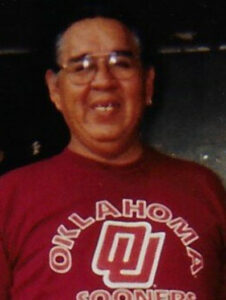 Sam Tiger, Sr., 71, of Cherokee and formerly of Oklahoma City, Okla., passed away following an extended illness while resting in his home in Cherokee. Sam was born to Tom and Hannah (Mitchelle) Tiger and raised in Oklahoma City and was member of the Seminole Nation of Oklahoma.

He graduated high school from Central High School before going onto Haskell College in Kansas where he met and married Iva Reed, the mother of their two children Tracy and Sam Jr. (Renee). He loved OU Football and watched televised games or listened on the radio while cooking-out or having frybread and chili. He was a very good cook.  He’d fry a turkey at Thanksgiving for his family. He was known for making a great “HOT” jalapeno Mexican cornbread and other great dishes. He attended all these engagements regularly until his health declined.

Sam was a member of the Central Baptist Church of Oklahoma City. He loved the company of his sister-in-law who visited and bring “homemade” goodies. He always spoke well of the Tsali Manor Senior Retirement with love. He enjoyed the company and all the activities the center had to offer, especially the trips to such places as Niagara Falls, Seminole Reservation of Florida, and a cruise to Alaska. He looked forward to visits from his sisters so they could catch up on family and friends back Home. He would show family a great time much as a tour guide when visited. Sam was respected and dearly loved.

Sam was preceded in death by brothers, James Tiger (US Army) in Germany and Thomas Tiger of Oklahoma City.

Pallbearers were among James “Bones” Toineeta, Seth Tiger, Dylan Murphy and other Family and Friends. Honorary Pall Bearers will be SPC Bradon Rhodes (US Army), PFC Ki French (US Marines), William “Will” Gonzales, Joseph Tiger, David Tiger and Timothy Tiger. A thanks is given to all the Churches, Prayer Chains, phone calls and individual prayers, support through this change in life. God Bless.