Kituwah placed in trust for Tribe

KITUWAH – Kituwah, the Mother Town of the Cherokee, located just outside of Cherokee near Bryson City, has been placed into trust for the Eastern Band of Cherokee Indians by the Bureau of Indian Affairs (BIA), U.S. Dept. of the Interior.  The property was purchased by the Tribe in 1996 and includes an ancient mound. 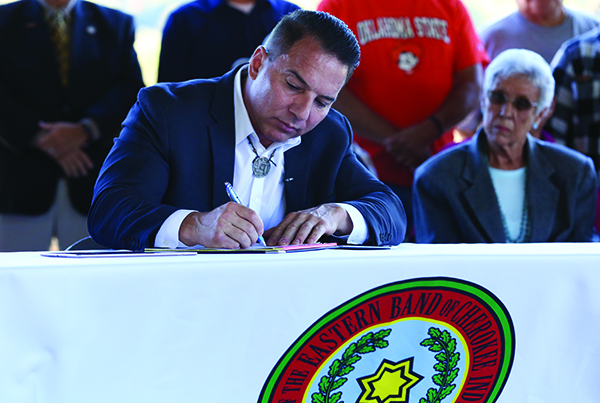 Following an official determination by the BIA last month, Principal Chief Richard G. Sneed signed an official document designating it as so on the afternoon of Monday, Oct. 18. According to the Public Notice to Acquire Land into Trust, the site totals 307.03 acres.

“This is an historic day for all Cherokee,” Chief Sneed said just prior to signing the document on Monday.  “Today, this land, Kituwah, the birthplace of the Anikituwah, the Principal People, today known as the Cherokee, will now belong to our people and to our posterity forever.  For thousands of years, prior to European contact, our people lived, worked, hunted, fished, and raised families on land that now makes up seven states in the southern United States.”

He added, “Kituwah, the Mother Town of the Cherokee, over 300 acres, was redeemed in 1996 under the leadership of the first female Principal Chief of the Eastern Band of Cherokees, Joyce Dugan.  All Cherokees, whether Eastern Band, Cherokee Nation, or United Keetoowah Band, each owe a tremendous debt of gratitude to Chief Dugan for her vision and leadership in initiating the purchase of this sacred land.”

Chief Sneed said getting Kituwah put into trust for the Tribe has been a priority of his administration since day one, and he thanked Vice Chief Alan B. Ensley and Tribal Council for their support in the effort.

“So, with the signing of this document, I invite all Cherokees to come and take in the beauty, solitude, and sacredness of this place.  It is yours.  It is mine.  It is ours forever.” 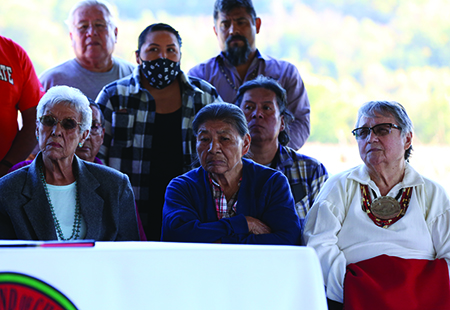 The three EBCI Beloved Women were in attendance including, left to right, Myrtle Driver, Ella Bird, and Carmaleta Monteith.

Former Principal Chief Joyce Dugan was instrumental in the Tribe purchasing the property in 1996.  She told the One Feather, “I will always believe that the purchase of the Kituwah site which returned our Mother Town to our Tribe was the most significant accomplishment of my term as Principal Chief.”

She went on to say, “As tribal officials, we can build many structures that improve the lives of our people, but the most important gift we can give to this generation and all that follow is the preservation of our history and culture.  I truly feel that the purchase of Kituwah brought about a revival of the arts, cultural traditions and historical knowledge, which our people are still embracing today.”