The Cherokee Central Schools (CCS) Board of Education held its first meeting in the conference room of the new administrative building on Monday, Oct. 18.

Before getting into the scheduled agenda, the Board had an extended conversation on the status of the remote and virtual learning situations with CCS students. Superintendent Murray said that it has been a struggle to stay in constant communication with the families in the ‘remote’ program, and because of this a standard has been difficult to place. He said that basic aspects of school like grading and attendance must be modified for this situation. 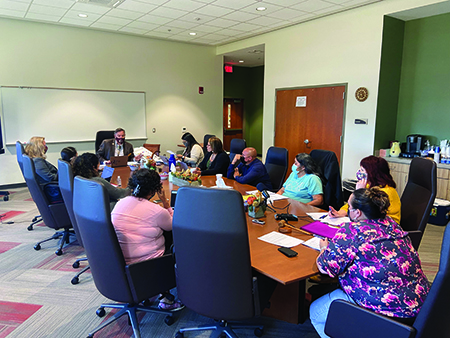 The CCS Board of Education held its first meeting in the conference room at the new administration building on campus on Monday, Oct. 18. (JONAH LOSSIAH/One Feather Photo)

“I’ve worked with the principals in saying do your very best to hold high expectations and continue. I cannot tell you that everybody is doing exactly what they should be doing. There are some, just like last year, that are taking advantage. If we were completely out of a pandemic, then I would look at you and say ‘let’s hold them accountable. Let’s go ahead and fail them and do what we have to do.’ In my opinion, with the quarantines and the variants you’re facing, it’s worse now than it was last year,” said Murray.

Tara Reed-Cooper vocalized her concern for this group of students and questioned how CCS was going to handle these varying situations.

“Are we going to test these individuals at the end of each quarter? Because we still have a responsibility to them. They have opted out and chosen to become virtual, but there’s still an expectation from me, as a Board member, that they’re still getting everything that they need to be getting. We can’t make them do it. However, that responsibility is, I feel, on my shoulders as a Board member to make sure they’re getting what they need,” said Reed-Cooper.

Murray and Assistant Superintendent Beverly Payne said that these kids would have ‘integrated testing’, but the day-to-day scoring of traditional schooling was altered. Murray said that failure to turn in assignments would not be given a zero.

“They’ll have grades and they’ll be marked down. What I’m saying is they won’t get zeros. What they’ll get is a 50,” said Murray.

Reed-Cooper was adamant that they communicate with the families of these students to ensure they are getting what they need. She said that if CCS doesn’t work to maintain a standard for the kids than the community will blame the school, not the families.

“Our responsibility extends further than just saying we’re allowing you to be virtual and allowing you to do it at home …  If we can’t hold them responsible, or if we’re not going to take attendance, or see where they’re at, at the end of the year we’re failing them if we continue to pass them,” said Reed-Cooper.

Murray said that they will continue to seek updates and reports of the status of the students, and the Board will monitor the situation moving forward.

New Board member Melanie Lambert was also curious about the status of vaccinations at CCS. Murray reported that the staff was up to an 84 percent vaccination rate. Lambert still was curious if the Board was interested in mandating the vaccine.

“We can mandate, but why if you’re getting 84 percent or better and your Tribe hasn’t done it yet? …again, that wasn’t my decision that was the Board’s discussion,” said Murray.

No vote was made on Monday, but Lambert suggested that the Board should look back into the topic of mandating.

“I’m in support of mandating it. I wonder if that may bring more kids back…we are in a pandemic, so I think everybody should do their part,” said Lambert

The first decision made in the meeting was to settle the tiebreaker from the Board’s last session regarding a new Vice Chair. Traditionally, the Tribal Council Rep. would offer the tiebreaking vote. However, Wolftown Rep. Bo Crowe insisted that it would be best to come to a conclusion together. He had several suggestions but said he would decide via the flip of a coin if necessary.

The Board then moved forward to the consent agenda. They approved the following positions at CCS:

There were also three walk-in items that needed approval. Each were read into record and approved by the Board:

The final piece of business covered in open session was Payne walking the Board through an update on the school’s upcoming accreditation process. She said that they are working with everyone at CCS to prepare them for the virtual visit. This will take place March 27 through April 1, 2022.

The Board then finished the meeting in a closed session to discuss specific personnel. No decisions were voted on in this closed session.

The next meeting of the School Board is scheduled for Monday, Nov. 1 at 4:45 p.m. Meetings are being held in the conference of the new administrative building on the CCS campus. These sessions are considered public meetings and are open to public attendance except for closed sessions.