ANDREWS – The Cherokee Braves (4-3) picked up a big win over Andrews (5-2) on the road on the evening of Friday, Oct. 15.  Don Bradley, Braves senior quarterback, ran for two touchdowns to give the Braves a 12-9 win. 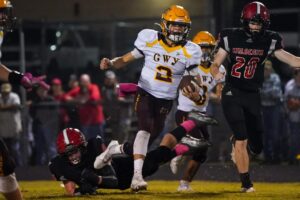 Don Bradley (#2), Cherokee senior quarterback, runs during a game at Andrews High School on the evening of Friday, Oct. 15. He led the Braves with 79 yards on 22 carries and 2 touchdowns and was named the Cherokee One Feather Player of the Game by the 104.1 FM broadcast staff. (Photo courtesy of A&M Sports)

Andrews won the stat sheet on the night with 278 total yards to Cherokee’s 151, and the Braves had 3 turnovers (1 fumble, 2 interceptions) while the Wildcats had none.

The run game sustained Cherokee in the game as they gained 142 of their total yards on the ground.  Bradley led the way with 79 yards on 22 carries and 2 touchdowns.  Michael Driver added 47 yards on 13 carries.

The Braves were led defensively by Elijah Watty and Luke Climbingbear with 11 tackles each followed by Kenton Tsi-sgwa Hill with 10.

Andrews got on the board first with a 27-yard touchdown pass from Donovan Bateman and took a 7-0 lead in the first quarter.  Bradley ran 9 yards for his first score of the game in the second.  The point-after kick failed and Cherokee trailed 7-6 at the half.

The third quarter was scoreless.

Bradley hit the end zone on a 4-yard run in the fourth quarter to give Cherokee the lead.  The two-point try failed and the Braves led 12-7.  Andrews would add a safety late in the game, but it was not enough as Cherokee took the 12-9 win.