Cruise the Smokies has big showing

Brenda Berry, of Anderson, S.C., was wiping down a car she has been attached to since childhood during an event at the Cherokee Indian Fairgrounds on Saturday, Oct. 16.  She was caring for her 1954 Ford Ranch Wagon at the Cruise the Smokies Rod Run hosted by the Cherokee Rodders. 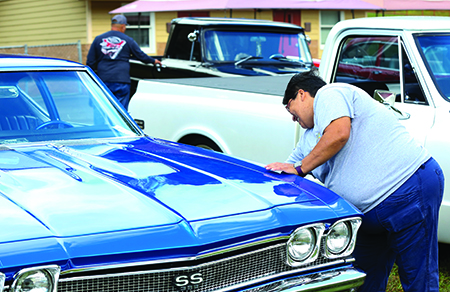 Diane Driver, a member of the Eastern Band of Cherokee Indians and Native Street Machines car club, wipes down one of her vehicles during the Cruise the Smokies Rod Run at the Cherokee Indian Fairgrounds on Saturday, Oct. 16. (SCOTT MCKIE B.P./One Feather photos)

“This car has been my car my whole life,” she said.  “My grandmother bought it brand new.  She owned a florist and this was her delivery vehicle.”

The vehicle then went to Berry’s father who used it for years and then eventually to her.  When she received it, the condition had declined.  “The floors had rusted out.  It had seen some hard days.”

It was quite a project to get the wagon back in good condition.  “It took nine years and 105 patch panels and this is the end result.”

Berry’s love for her vehicle was a sentiment shared by hundreds more for theirs during the event which drew over 300 various years, models, and makes over the two-day event.

Mike Walker, of Pendleton, S.C., has had his 1958 Chevy Truck for 45 years.  “This is the third incarnation.  It’s been totaled once.  It was finished three times.”

He does most of the work himself – all except for the chrome plating and upholstery.  In speaking of his love of cars, he commented, “I was corrupted at an early age…I’ve just always liked automobiles.  I am retired from working in management and like doing something physical and working with my hands and solving problems – figuring out how to do things.” 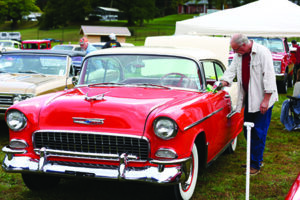 Charles Bryson, Cherokee Rodders president, said he was enthused with the turn-out for the organization’s 22nd annual event.  “This year we were able to do free admission which is something that we hope to keep on doing with our sponsorships.  We take any and all sponsorships and donations.”

He added, “As a car club, we are not a for-profit business by any means.  None of us get paid.  We’re all volunteers.”

Bryson noted that all of the proceeds from the event, which come in the form of entry fees for people showing their vehicles, either go into future events, are given back to participants in the form of prizes, or are given to charitable organizations.  The entry fee is $35 for participants and has remained the same since the event’s inception.  “We’ve always tried to keep that consistent, and we always give everything away.  This weekend, we’re probably a little over $10,000 in giveaways and most of it is cash.” 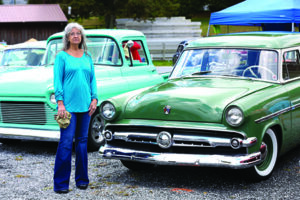 Two donations arising from the event include one to Rolling Start, an organization based in Sylva that takes older vehicles and gets them running again to subsequently donate them to people in need of reliable transportation.  “They’re just retired guys who come together, all mechanics.  They fix the cars up and then they go through a list from Social Services and give them to people in need who need a car.”

Jeff Richardson, of Townville, S.C., was at the show with his 1955 Chevy.  In speaking about the event, he said, “I never miss it.  I’ve been to every one until COVID hit.”