TAHLEQUAH, Okla. – In honor of Sequoyah and this year’s bicentennial celebration of the Cherokee syllabary, Cherokee Nation has become the first Native American tribe to use motion and facial capture technology to help preserve and promote an indigenous language.

In collaboration with the tribe’s language program, Cherokee Nation Film Office and Original Content today premiered “Sequoyah: Voice of the Inventor for the Bicentennial.” 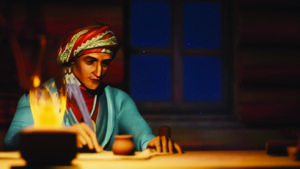 Behind the scenes as “Sequoyah: Voice of the Inventor for the Bicentennial” is filmed at the Cherokee Nation Covid Response Virtual Soundstage, using state-of-the-art motion and facial capture technology. (Cherokee Nation image)

“Through the use of this state-of-the-art technology and the incredible efforts of our first-language speakers, we are perpetuating the Cherokee language for many generations to come,” said Cherokee Nation Principal Chief Chuck Hoskin Jr. “For 200 years, Sequoyah’s invention of the Cherokee syllabary has truly advanced our people, and it continues to move us forward today through new and innovative technological breakthroughs.”

Filmed at the Cherokee Nation Covid Response Virtual Soundstage, the production brings Sequoyah to life through real-time graphics and the voice and movements of first-language Cherokee speaker Steve Daugherty.

“Cherokee Nation has brought programming, infrastructure and industry-leading technologies to Oklahoma,” said Jennifer Loren, director of Cherokee Nation Film Office and Original Content. “Cherokee Nation’s COVID Response Virtual Soundstage includes unique content creation tools that have never been available in Indian Country before now. This virtual production is a first of its kind among tribal nations and an excellent example of how emerging technology can help us preserve and share indigenous languages.”

The tribe’s virtual video production implements a combination of video game engine and motion and facial capture technology using a motion capture suit and headset to record body movements, facial expressions and language. Through a live render engine, recorded data was then used to create a walking and talking digital character of Sequoyah.

The production was created using Unreal Engine, the same technology used for major industry productions such as “The Mandalorian” and for popular video games such as Fortnite.

Sequoyah, also known as George Guess or George Gist, introduced the Cherokee syllabary in 1821. The revered Cherokee statesman and linguist invented the first written language among Native American tribes and influenced written languages throughout the world.

or more information and to watch “Sequoyah: Voice of the Inventor for the Bicentennial,” please visit https://anadisgoi.com/index.php/culture-stories/724-cherokee-nation-brings-burgeoning-technology-to-language-efforts. Photos and video from behind-the-scenes of the production are also available.