The Cherokee Braves (3-3) moved into a four-way tie for second place in the Smoky Mountain Conference with a win over the Robbinsville Black Knights (3-3) on Friday, Oct. 8.  The Braves outgained Robbinsville 259 yards to 163 en route to a 20-7 victory at Ray Kinsland Stadium.  With the win, Cherokee is tied at 1-1 in the conference with Robbinsville, Swain Co., and Andrews according to Maxpreps.com. 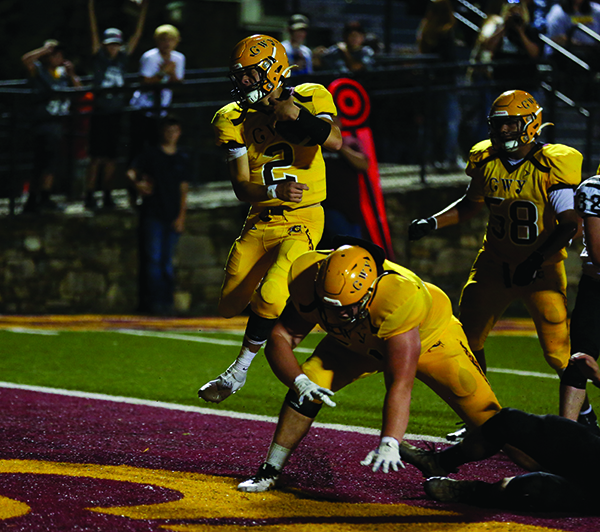 Don Bradley (#2), Cherokee senior quarterback, jumps into the end zone on a 3-yard touchdown run in the second quarter of a game against Robbinsville at Ray Kinsland Stadium on the evening of Friday, Oct. 8. He led Cherokee with 78 yards rushing on 15 carries and 2 TDs, and he completed 8 of 15 passes for 69 yards, 1 TD, and 1 INT. (SCOTT MCKIE B.P./One Feather photos)

Don Bradley, Braves senior quarterback, led Cherokee with 78 yards rushing on 15 carries and 2 TDs, and he completed 8 of 15 passes for 69 yards, 1 TD, and 1 INT.  Chase Calhoun added 61 yards on 15 carries and Malakai Fourkiller-Raby had 31 yards on 5 carries.  Cameron Lane-Sampson was Bradley’s top target on the night with 40 yards on 3 receptions.

Cherokee’s defense held the Black Knights to 76 yards rushing and 87 yards in the air.  Elijah Watty, named a Cherokee One Feather Co-Player of the Game, along with Bradley, had an interception early in the first quarter that set the tone for the game defensively. Full defensive stats were not available by press time.

After a scoreless first quarter, Bradley got Cherokee on the board a few minutes into the second with a 3-yard touchdown run.  Mato Grant added the point-after and Cherokee led 7-0.

Six minutes later, Robbinsville’s Kage Williams scored the equalizer on a 1-yard run.  Cody Cline tied the game at 7-7 with the point-after and the teams entered the locker room even.

The third quarter consisted of staunch defensive play and a couple punts by both teams. 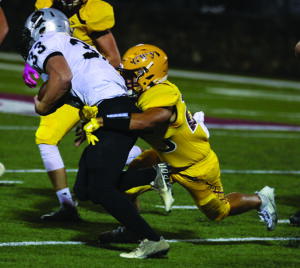 Elijah Watty (#25), named a Cherokee One Feather Co-Player of the Game along with Don Bradley, tackles Robbinsville’s Kage Williams.

Five minutes into the fourth, Calhoun caught a 10-yard touchdown pass from Bradley to put the Braves up again.  Grant added the point-after, and Cherokee led 14-7.

Robbinsville fumbled the ensuing kickoff which the Braves recovered at the Black Knights 19-yard line.  On the next play, Bradley ran 19 yards for a score.  The point-after kick failed and Cherokee led 20-7.

The Black Knights’ next possession ended with an interception by Cherokee’s Kaden Trantham, and the Braves were able to run out the clock to secure the win.

This was the last regular season home game for the Braves who finish out with three road games starting with a trip to Andrews (5-1) on Friday, Oct. 15 at 7:30 p.m.