The Cherokee JV Braves finished the season on a good note with a 20-0 win over the Swain Co. Maroon Devils on the drizzly night of Thursday, Oct. 7 at Ray Kinsland Stadium.  With two touchdowns, Cherokee’s Brandon Santiago led the way for the Braves who averaged 4.3 yards per play (167 total yards to Swain’s 111). 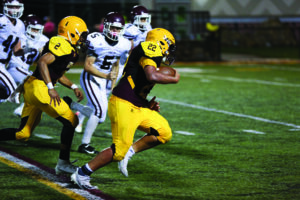 Cherokee’s Brandon Santiago (#22) breaks away on a 34-yard touchdown run late in the fourth quarter in a game against the Swain Co. Maroon Devils at Ray Kinsland Stadium on the rainy evening of Thursday, Oct. 7. (SCOTT MCKIE B.P./One Feather photos)

The game was riddled with turnovers with the teams combining for 11 total.  Swain had 7 (5 fumbles and 2 interceptions) and Cherokee had 4 fumbles.

Santiago accounted for more than half of Cherokee’s total offense with 84 yards on 16 carries and 2 touchdowns.  Teddy Panther added 32 yards on 11 carries.  K. McCullough led Swain with 92 yards on 17 carries.

The first quarter was slow-going for both teams.  Cherokee’s Josh Phillips intercepted a pass midway through the quarter for the first turnover of the game.  That was followed by each team fumbling the ball once, and the quarter ended scoreless.

A few minutes into the second quarter, Santiago got Cherokee on the board as he ran for a 2-yard touchdown.  The two-point conversion failed and Cherokee led 6-0. 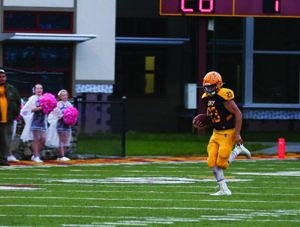 Cherokee’s Michell Gayosso (#23) heads down the field after intercepting a pass en route to an 80-yard touchdown return just before halftime.

Gayosso lit up the stadium right before halftime though as he intercepted a Swain pass and took it 80 yards to the house.  Again, the two-point conversion failed and Cherokee took a 12-0 lead into the locker room.

Two more fumbles occurred in the third quarter which was scoreless.

Each team would fumble once more in the fourth quarter, but Cherokee did get on the board again to seal the victory.  With 4:15 left in the game, Santiago ran for a 34-yard score.  The two-point conversion was good and Cherokee led 20-0 which is how the game would end.