The Queen House Gallery opens Friday, Oct. 8 and will feature classic and contemporary work from all Native American artists. 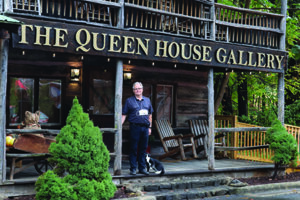 The gallery is being opened by Lambert Wilson, who has been collecting pieces for the last several years in hopes of opening a location like this in Cherokee. He says that there is a focus on local artists from the Eastern Band of Cherokee Indians (EBCI), but that the gallery will hold work from Tribes across the country.

There is a ‘Legacy Collection’ made up of pieces from artists who have passed, like Eva Wolfe, Rowena Bradley, and Beloved Man Jerry Wolfe. However, much of the art on display is from younger artists that Wilson has worked with. He said that their artistry is the main reason he wished to open The Queen House.

“My goal is to help foster Cherokee art because I worry about it. We don’t have enough young people. There seems to be a little bit more interest than there was, but it’s not what it used to be,” said Wilson.

Everything held in the gallery is for sale. Wilson said that he also hopes to hold exhibits and events highlighting local artists at the shop. He said that that is currently off the table due to the pandemic, but he plans on starting shows like this in Spring if possible.

Wilson is from Bryson City and has spent much of his life developing relationships with people in Cherokee. He is currently the owner of the Drama Inn and El Camino Motel in Cherokee.

“I’m on the Board at the Museum (of the Cherokee Indian), Cherokee Historical Association, on the 501c3 Board at Qualla Arts. So, I’m pretty involved in the community. I usually judge when they have the Fair. If people come to the co-op and have things that they want to have appraised, Vicki (Cruz) calls me and I go over there and do that for them. I’m not an appraiser, but I know what things are worth,” said Wilson. 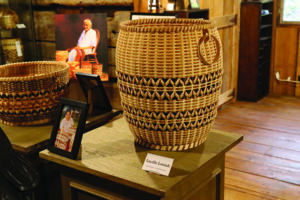 A basket woven by Lucille Lossiah on display in the gallery.

He said that he wants to see the valuation of Cherokee art be as high as that of other Native American work. He has seen the value increase over the years and wants to push for more awareness.

“I knew Rowena Bradley and I knew Eva Wolfe. And I know what it takes to make one of those big double-weave baskets … it’s sad to me that these ladies sold their precious work for very little. At the time it was pretty good. I can remember when I would go by the co-op when I was a principal, and they would have Eva Wolfe baskets for like 500 dollars. Back then 500 dollars was a lot of money. So, they probably paid her 250. Well, that same 500-dollar basket now is 5000 or more,” said Wilson.

Education is part of Wilson’s mission. He says that he wants local artists to be the face of Cherokee. He said that it’s an uphill battle, but there is a strong path for Cherokee to build its reputation in art.

“I think we need to focus more on traditional art and not the junk. Just making people aware of what it is … I want people to see that it is still alive, that it’s still going.”

He said that he won’t be able to man the shop a lot of the time, so he says it’s crucial that his employees are as passionate about the work as he is.

“The people that I’m going to have work here are knowledgeable about Cherokee art. They can talk to the people and tell them what the process is. What really happens in order to make a basket. You know you don’t go up to Wal-Mart and buy the splints. You can do that, but it’s not this.”

He said that more than anything he hopes this gallery can offer another platform to the local artists he has worked with. He also hopes that this will open the door to more people interested in crafting and being inspired by their cultural art.

“It’s mainly to make the public aware of Cherokee art and to help the artists. To encourage them. Have a place where they can come and demonstrate and show their work and have an audience. Make them feel really important,” said Wilson.

The gallery is set to be open seven days a week. It is located on Highway 441 across from the Dairy Queen.

Wilson said that any artists interested in having their work for sale at The Queen House Gallery can stop by with their information or email him at lwilson@swainmail.org.

The gallery has been carefully put together by Wilson and friends for the past four months, and now it is finally open.

“It’s been a goal of mine for years and years. It’s really been exciting. I don’t know if it’ll make it or not, but I’m willing to try … my goal is to make people aware of what Cherokee art is. Not just what it is, but how it’s made. The history behind it. And also, to introduce people to these artists.”