Beaded swan feathers, representing past Cherokee Beloved People, adorned posts set up at the front of a stage area in the Yellowhill Activity Center as another Beloved person officially took their position. 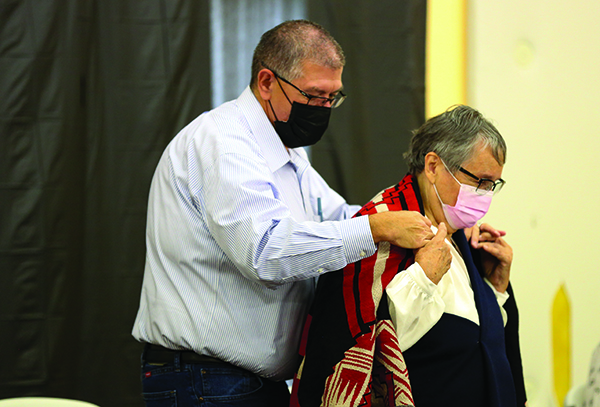 Tribal Council Chairman Richard French, left, presents a blanket to Beloved Woman Carmaleta Monteith during an induction ceremony for her at the Yellowhill Activity Center on the afternoon of Thursday, Oct. 7. (SCOTT MCKIE B.P./One Feather photos)

Carmaleta Monteith, an elder of the Eastern Band of Cherokee Indians (EBCI) from the Yellowhill Community, was named a Beloved Woman of the Tribe in May.  The EBCI Beloved Women Committee hosted an official induction ceremony for her at the Yellowhill Activity Center on the afternoon of Thursday, Oct. 7.

Kimberly Smith, EBCI Beloved Women Committee chairperson, said, “We want to thank Carmaleta Monteith herself for the incredible human being she is and her willingness to honor the legacy of the Beloved and respect the role she takes after today in our community.”

She added, “We are beyond secure in knowing she will live up to the legacy of the Beloved Women and Men and leave her own mark for future generations to be inspired by.  I am proud to see Carmaleta step into this role and am excited to see where she takes it.”

Tom Belt, a Cherokee Nation elder and fluent Cherokee speaker, said the prayer to open Thursday’s ceremony and related prior, “It is noted that, throughout history, and according to our traditions, we are told and have been told by our elders it is necessary to hold our ways, show our gratefulness, and give thanks to the Creator for all that we have and everything that we do, especially on such a solemn occasion as this. So, this is the way that we do it.”

Shana Bushyhead-Condill, Museum of the Cherokee Indian executive director, gave the keynote speech during the event and said, “We know that we are, as Cherokee people, matrilineal. Our clan is passed down from mother to child. It is also clear that we have always had strong female leadership in our Tribe. From the historic record, we know that the role that women held in decision-making was perplexing to our non-Native visitors.” 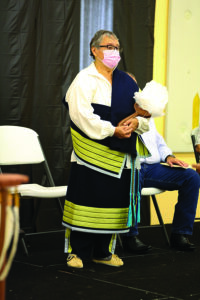 Beloved Woman Carmaleta Monteith holds a swan wing wand she was presented during the ceremony.

She went on to say, “When doing Native research, it can be challenging to use non-Native, first-person accounts because we must read them through a critical lens. What was unusual to European folk was very much a part of Native government pre-contact. What started as perhaps a novelty or amusing ‘hen-pecked’ men, quickly became a liability when it became clear that we were going to have to defend our place.”

Bushyhead-Condill spoke about Cherokee women’s role stating, “The way women retained leadership roles has been removed out of the public sphere. The role of the Beloved Woman is one of those roles that has shifted over time. We are, as Cherokee people, becoming more intentional about cultivating the resurgence of our ways. We have the luxury of being able to do this in an open, firm, and intentional way, because of the battles our ancestors fought for us for land, for rights, for ceremony, for citizenship. With this, of course, also comes responsibility.”

During the ceremony, Tribal Council Chairman Richard French presented Beloved Woman Monteith with a blanket.  “Carmaleta is well deserving of this honor and she does a lot for the community. She does a lot of volunteering and work with the hospital governing board.  Carmaleta, this is an honor to be able to present with this blanket from Tribal Council for all that you do for the community and for the Eastern Band.”

Representing the NAIWA organization of which Beloved Woman Monteith has been a long-time member, Lucille Wolfe commented, “Carmaleta Monteith has been a valuable part of the Cherokee community since her youth and has been part of NAWIA since the beginning with her mother. NAIWA has watched her grow into the incredible young woman she is today. She is the embodiment of a Cherokee Beloved in every aspect of who she is. Her selfless giving of time, energy, and treasures to countless programs has been one example of the incredible woman. She has represented our Tribe locally, regionally, and nationally with grace and dignity. Her dedication and passion to see projects through, even with barriers, is a testament of her love for the Cherokee people.”

Tribal Council passed Res. No. 447 (2021) unanimously during its regular session on Thursday, May 6 that made the designation.

The legislation, submitted by the EBCI Beloved Women Committee, states, “Carmaleta Littlejohn Monteith, an outstanding member of the Yellowhill Community, has dedicated her life to embodying the Cherokee Core Values and strongly exudes characteristics of a Beloved Woman.” 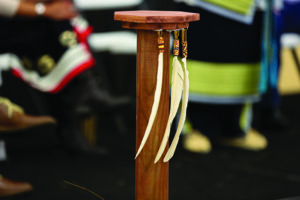 Beaded swan feathers were displayed during the event to represent the Cherokee Beloved People throughout history.

That day she spoke to Council stating, “The women that precede me, I respect and honor them and I hope to be able to hold the integrity of this honor and continue to serve.”

She went on to say, “We’re not islands unto ourselves.  It takes everyone in the community to achieve things.”

The legislation spoke to her embodiment of the Cherokee Core Values and states, “Carmaleta has demonstrated the Cherokee Core Value of tribal identity in abundance.  She has contributed to multiple publications and films that preserve the integrity of Cherokee people and their stories.  She has spearheaded many projects that have promoted and preserved Cherokee art and culture within the region.”