The Cherokee Central Schools (CCS) Board of Education met Monday morning (Oct. 4) following the swearing in of three new members. 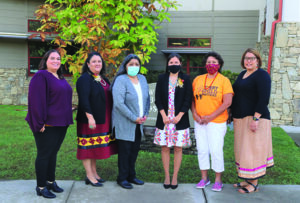 The first piece of business that was handled by the Board was to elect new officers for the next two years.

Jennifer Thompson was nominated for Chairperson by Regina Ledford Rosario, and no other nominations were made. Thompson was unanimously voted in to retain the position of Chairperson.

Kristina Hyatt was nominated for Secretary by Tara Reed-Cooper. With no other nominations, Hyatt was unanimously voted in as the new Secretary.

The reshuffled Board unanimously passed the consent agenda, approving the following eight resolutions: 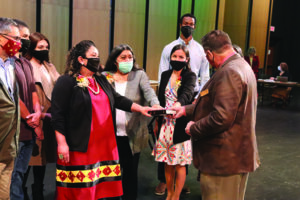 Following the consent agenda, Assistant Superintendent Beverly Payne presented a couple pieces of business to the Board. First, she offered the CCS Annual Report for the 2020-2021 school year. Chairperson Thompson said that members could review the document and get in touch with Payne if they had any questions.

Payne then reminded the Board that it would be in this upcoming school year that they would be getting reviewed for accreditation. She said that due to the pandemic, the company is requiring the evaluation to be done virtually. Payne requested that a portion of each of the Board’s meetings to be set aside for training members on the accreditation process. Payne said that the Board would be interviewed as a part of that process, and Chairperson Thompson is the lone member who has been through accreditation.

As is customary for the first meeting following turnover or reelection, the Board underwent two trainings. Ashley Leonard was invited in to conduct ‘Ethics Training and Board Member 101’. HR Director Heather Driver was also set to offer a two-hour training on ‘Suspected Child Abuse & Neglect (SCAN)’.

The Monday, October 4 meeting of the CCS Board of Education was called to order at 11 a.m. with Chairperson Jennifer Thompson; Secretary Kristina Hyatt; Board members Tara Reed-Cooper, Regina Ledford Rosario, Melanie Lambert, and Berdie Toineeta; Superintendent Michael Murray; Assistant Superintendent Beverly Payne; HR Director Heather Driver; and Administrative Assistant Terri Bradley all in attendance. A Tribal Council Representative had not been selected by the time of this meeting.

The next meeting of the School Board is tentatively scheduled for Monday, Oct. 18 at 4:45 p.m. Meetings are being held in the Chief Joyce Dugan Cultural Arts Center at Cherokee Middle School. These sessions are considered public meetings and are open to public attendance except for executive (closed) sessions.