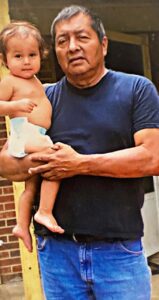 William D. Junaluska, of Cherokee, died on Sept. 27, 2021 with his wife, Marie Junaluska, by his side.  William was born in Cherokee on Dec. 30, 1946 to the late Arch Junaluska Sr. and Wilma Taylor Junaluska. He was a lifelong resident of Cherokee.

Bill was a devoted father granddad and great granddad.  He enjoyed driving and traveling and making an adventure of life.  He loved to talk to everyone and could always make you smile and laugh and brighten your day.

A Funeral Service will be held on Saturday, Oct. 2, 2021, at Rock Springs Baptist Church.  Pastors Greg Morgan and Keith Carson will officiate.  Burial will follow at Standingdeer Family Cemetery.  Friends of the family will serve as pallbearers.

Crisp Funeral Home is assisting the Junaluska family with arrangements.