Many of us live our entire lives without the privilege of serving with a great leader. I am not one of those. 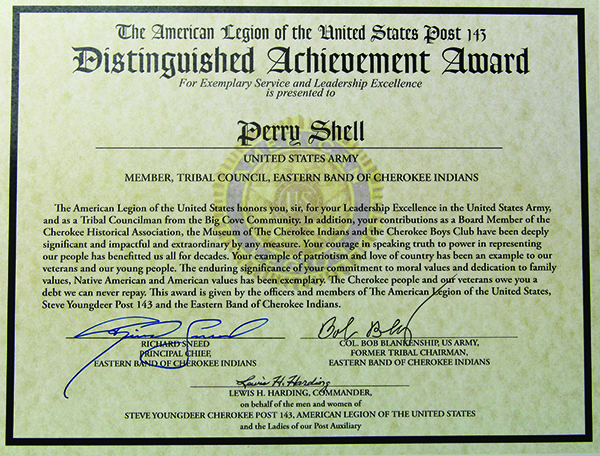 In my 42 years back in my hometown of Cherokee, I have been blessed to know, watch, serve with, and be mentored by extraordinary leaders that demonstrated the essence of selfless service and leadership excellence. To me, retiring Councilman Perry Shell has been one of our community’s most impactful leaders.

Perry is a veteran of the United States Army. Our American Legion Post in Cherokee is very proud of and grateful for his work on the Tribal Council, at the Cherokee Historical Association, Museum of the Cherokee Indian, the Cherokee Boys Club, and so much more. He helped lift us all up.

Others of his contemporaries fall into the “Leadership Excellence” category – former Principal Chief Robert S. Youngdeer, the Blankenship brothers -Bob and Kenny, combat veterans who helped heal the wounds of war by serving us. Navy veteran Jerry Wolfe ascended to iconic status through hard work, sacrifice, kindness, and love. He is a legend among us. Additionally, honorary tribal member Ray Kinsland qualifies. He was a giant of humility, love, and service to mankind. We learned so much serving with these amazing brothers.

Our people have a matriarchal lineage, a distinct cultural overlay that sets us apart. To honor that, consider these women of power with astonishing gifts of intellect, whose service to the tribe of extraordinary dedication has shown leadership excellence: Principal Chief Joyce Dugan, Beloved Woman Dr. Carmelita Monteith, Darlene Whitetree, Brenda Oocumma, Norma Holt Moss, and the late Beloved Woman Col. Kina Swayney. And, there have been so many more.

Over the years other great leaders in the BIA, Tribal Council, in the Chief’s office, and in our American Legion Post, have blessed us with their insight, work ethic, dedication, and leadership.

The opportunity to serve my people in the community of my birth for four decades has been part of my healing. Perry Shell and his beloved wife Phyllis have shared in that. And for that, I am grateful.

Be with us in Council or on television, Thursday, Aug. 5, as we recognize and honor the service and leadership excellence of Councilman Perry Shell with an American Legion Distinguished Achievement Award. You will be glad that you did.

Thank you, Perry, for all that you have done and that you are. Godspeed and blessings from all your brothers and sisters. The Fallen, and those that remain and are here to honor you.

We love you. Sgi.

Harding is the commander of the Steve Youngdeer American Legion Post 143.