Transportation Center to be re-named in honor of Littlejohn 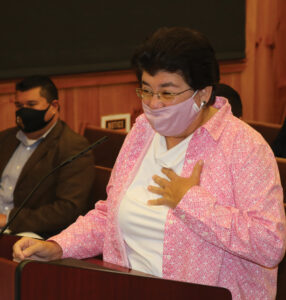 The legislation was submitted by the EBCI Transit Program and Wolftown Reps. Bo Crowe and Chelsea Taylor Saunooke.  It states that the Center was opened in 2012 with grant funding obtained by Littlejohn who also “founded EBCI Transit, initially a service of Tsali Manor to provide transportation to seniors, beginning services with only two other staff members.”

Following approval of the legislation, Littlejohn addressed Council and said, “This is really big.  I cannot tell you how it would have been if I didn’t have God’s help and if I didn’t have wonderful, awesome, hard-working staff.  I would not be here today.  That’s for sure.”

She said when she was told about the resolution she told the submitters, “No, don’t do that – there’s so many more deserving people, and I’ll name them to you.”

Littlejohn added, “I am humbled, and I am overwhelmed.  I thank you for all of your support over these years.”

Littlejohn is a noted Cherokee storyteller from the Wolftown Community.  She was a member of the Community Transportation Association of America’s Advisory Board and was recognized by the North Carolina Public Transit Division for ‘Exemplary Service’.

“Kathi was an integral part of creating the EBCI Transit Service that we all know today,” said Kevin Tafoya, EBCI Transit Dept. manager.  “She successfully created the program while creating employment and jobs for our community members.  She started the program to provide transportation to seniors.”

He added, “Kathi is a person of great compassion and is willing to help any community member.  She has instilled in us this great quality of kindness to our fellow people.”

Rep. Saunooke noted, “I think it’s something to honor someone while they’re still living so that they can live in the moment as well and take it all in.  I’ve had the privilege of sitting with Kathi a couple of times, and her wealth of knowledge goes beyond what you can imagine.  She’s very compassionate, and what I love is that she’s a role model.” 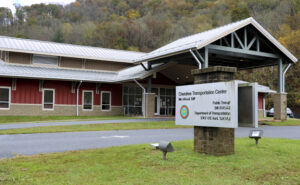 Rep. Crowe said his mother and Littlejohn were friends in school.  “I’ve known Kathi my whole life, and I can remember when Kathi would come into the schools as a storyteller.  I think she’s well-deserving for having this building named after her.”

Principal Chief Richard G. Sneed commented, “She personifies the character of what it means to be a Cherokee.  We need more people like her.  That value system needs to be manifested in all of us.  It’s just appropriate that this resolution was brought in today, and there’s nobody more deserving and more honoring than Kathi.”

Tribal Council Chairman Adam Wachacha praised Littlejohn saying, “She was a go-getter.  She’s always a person that is very humble and virtuous when it comes to wanting to help people in whatever role she’s played…our community really admires her and appreciates the work that she has done.”