This summer, Cherokee Central Schools (CCS) broke ground on a $22 million expansion project at their campus. 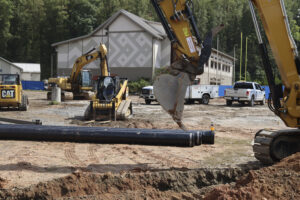 Shown is the construction ground for the ‘North building’. This structure will connect to Fieldhouse that is seen in the background. (JONAH LOSSIAH/One Feather photos)

According to CCS Director of Community Affairs Yona Wade, the construction is currently on schedule despite launching the project in the middle of the COVID-19 pandemic.

“Funding wasn’t affected at all by it. We did a little delay getting started just because the boundary was closed. So, having that kind of construction traffic moving on and off. But ,other than that, we’re right where we need to be based on our schedule that we set. The projection date for completion is still 2023,” said Wade.

Wade says that while it has been immensely difficult not having the students on campus for classes, the silver lining is that it has helped make up for lost time on this project.

This construction includes two new buildings and other additions to the grounds. There are three major areas of construction: The South building, the North building, and additional parking near the gate entrance.

“What you’ll see if you come on campus right now is that they’re preparing to build the South building, which will go in the place of the old Gathering Place. Then they’re working on the new parking lot. That’s the fenced in area next to the guard shack, those are going to be new parking lots. They’re also working on North building, which will connect to the field house. You’ll also see a fenced in area there,” said Wade.

The Gathering Place was the seven-sided building situated in the courtyard of the Elementary school. That has already been demolished and removed completely.

“The Gathering Place was one of the coolest places on this campus. So, it was sorted bittersweet for me to see the Gathering Place come down,” said CCS Superintendent Michael Murray.  “In the last three years, when I’m taking people through the campus and showing what beautiful, unique place this is, that’s what one of the centerpieces. It’s got so much culture wrapped up in it and it’s so different from any other project we’ve ever had. To see that thing actually torn down was difficult. But, we also know for us to grow and for this to be a true expansion project, that was the first step that needed to happen.” 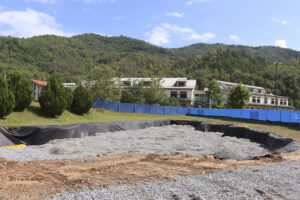 Additional parking will be available near the entrance of the school. This lot is situated directly across from the guard shack.

Not all has been decided when it comes the buildings themselves. Given that there are a couple years before completion, Wade says it is difficult to say what programs might need to utilize the spaces at this time. There are general plans for each space, but Wade said that a focus of the project was to make sure each building could be used in multipleways to benefit the school.

The North building will be set to house the Central office and CCS’s Pathseekers program. It will also hold a multipurpose space on the second floor. This will be used more consistently for athletics, but Wade said that it will be designed to act as a ‘multipurpose room’.

The wing that currently holds the Central office and Pathseekers will then be renovated to create more space for the High School. This includes adding more classroom space and planning to shift band and chorus, which is currently stationed in the middle school, to the high school.

When it comes to the South Building, Wade says that it is a strict upgrade and more from what the Gathering Place offered.  “The Gathering Place was a multipurpose space, but it didn’t have central heat or air. So, it kind of limited when you could use it.”

This building will have those amenities and much more. They are expecting to have classroom space for Pre-K, though that is not a definite at this time. The South building will also contain a culinary kitchen not unlike a community college that offers culinary classes.

Superintendent Murray said that he is excited for the potential of this expansion and how it has stayed steady despite the shakeups this year.  “It’s amazing to me that we are not only on track but its effectively moving along. We were able to stay within the budget, which again, that’s a blessing,” said Superintendent Murray.

“We are growing. And as we grow, and as we focus on academics and we certainly make sure that we’re celebrating the uniqueness of being Cherokee, you don’t want to lose folks based on not having enough space for them. Especially in the Elementary school, we are way over what we’ve had the past. So, we’re going to keep growing,” said Superintendent Murray.