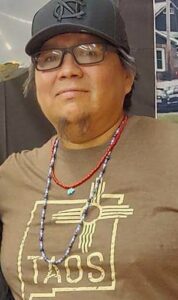 Nathan (Nate) Van Garcia, 45, of Cherokee and Ohkay Owingeh, N.M., went home to be with the Lord Wednesday, Oct. 28, 2020. A native of New Mexico and resident of Cherokee, he was the son of Joe and Onie West Garcia of New Mexico. He was preceded in death by all of his grandparents.

He was the biggest Tarheel and Washington Redskins fan. He was always smiling and joking with people. He liked to tell stories of when he was younger. “A nice guy…Diehard Tarheel and Redskins fan…Boom!”

In addition to his parents, he was also survived by his daughter, Kaelynn Garcia (Randon); one granddaughter, Z-Stu Tafoya; two sisters, Melissa Garcia and her children, Marcela, Emiliano, and Lake-Van all of Cherokee, and MorningStar Garcia and her children, I-Rey Garcia and Imperia Bark both of New Mexico; uncles, Nathan West, Villareal West, Angelo West (Kelly), and Gator West; aunts, Vivian Solis (Lupe), Gloria Hyatt, Lavinia Hicks (David), and several aunts and uncles from New Mexico and several cousins.

A graveside service will be held 9 a.m. Saturday at Wolfe Family Cemetery in the Big Cove Community in Cherokee. Brother Matthew Tooni will officiate.

Honorary Pallbearers will be Emiliano and Lakester Garcia.