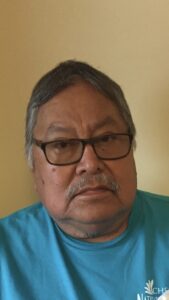 The family of Reuben Teesatuskie, 68, of Cherokee, is saddened to announce his passing on Monday, Oct. 19, 2020. He is preceded in death by his parents, Jonah and Estella Arch Teesatuskie; his brothers, David Arch of Kingsport, Tenn. and Richard Teesatuskie of Cherokee; an infant son, Jason Teesatuskie; and his sister, Rosalee Teesatuskie Smiley of Cherokee.

He is survived by his companion of 25 years and wife of 15 years, Maxine, who has been by his side for 40 years. In addition to her, he is survived by his daughters, Nylah Teesatuskie, of the home, Misty (Robby) and Candi (Monk), and his step daughter, Jackie Beck; all of Cherokee. He leaves behind 12 grandchildren, four great grandchildren as well as numerous nieces and nephews.

Reuben is also survived by his brothers, Raymond and Roy, both of Cherokee; and his sisters, Ramona “Pee-wee” and Rowena (Dean), also of Cherokee.

Reuben was former editor of the Cherokee One Feather as well as a former manager of the Cherokee Ceremonial Grounds. He was a Cherokee Police officer for approximately 10 years. He worked the Barnette Fire Tower for the U.S. Forest Service. He worked for Sequoyah Towing in his later years. He worked under the leadership of Chief John Crowe, at which time he served two terms as a Big Cove Council Representative. Reuben was the owner and operator of his own security business as well as starting the FBI Traders business with his late brother, Richard.  He was a volunteer fireman and first responder at one time in addition to working with the original Rescue Squad with John Harlan back in the day. Reuben was a police commissioner from October 2009 until his passing. Reuben traveled to various Pow-wows as both a food vendor and later as a craft vendor, making many friends along the way. He was responsible for renting the Yellowhill Community buildings for approximately 10 years.

Reuben enjoyed family get togethers, friends, talking to, and meeting people. He was a fan of gospel music and watching the kids, grandkids and great grandkids enjoying themselves and having fun. Most of all, he was a great son, brother, husband, father, grandfather, great grandfather and friend to all that knew him. He will be greatly missed by family and friends.

All attendants must wear a mask at all times. Please practice social distancing as well.