By SHEYAHSHE LITTLEDAVE and ANNA FARIELLO

In 2015, the Cherokee Indian Hospital opened the doors to a new state-of-the art facility designed specifically to reduce stigma and create a warm, comfortable atmosphere for patients. Among the designs was the integration of traditional myths and legends including the “river walk” through the main mall as water promotes healing in Cherokee culture. 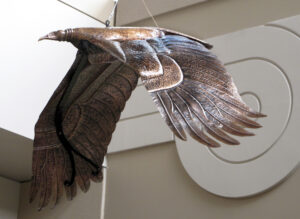 In 2019, a grant from Cherokee Preservation Foundation funded a project that would not only create the final piece of the creation story told throughout the hospital, but would continue the revitalization of metalworking on the Qualla Boundary. Specifically, it called upon the services of a team of artisans: William Rogers, Nathan Bush, and James (JR) Wolfe.

“The inclusion of the presence of the Grandfather Buzzard is critical to the completion of the depicted Cherokee creation story as presented in the artistic interpretation in the main mall area,” said Carmaleta Monteith, CIHA Governing Board Chair.”

The story goes back to when the water beetle first came to earth, dived into the vast seas of water and brought up soft mud to the surface.

“When the waters started to recede and land could be seen, the grandfather buzzard was sent out to find place for the animals to live,” stated Dawn Arneach, Museum of the Cherokee Indian interim director.  “When he reached Cherokee country he was tired from flying, when his wings swooped down, this created the valleys and when he brought them up, this created our mountains- this is short version of how the Great Smoky Mountains were made.”

The life-sized Grandfather Buzzard has a six-foot wingspan and soars, suspended by a steel cable and is made of hammered copper using a technique called repousse´ in which sheets of metal are shaped into three dimensions using hammers and stakes. Traditionally, eastern tribes used hammer stones to create embossed images onto sheets of copper after first hammering nuggets into thin sheets. For the most part, only fragments of these remain. On several, archeologists have drawn in missing parts to allow a fuller picture to emerge. Among the best known of these Mississippian pieces is a 13th century copper plate found in northern Georgia. Known as the Rogan Plate, the repousse´ sheet depicts a hero figure wearing an elaborate headdress with a beaked nose resembling a falcon.

The Grandfather Buzzard was designed by master craftsman William Rogers who makes custom metalwork and teaches from his studio in Cullowhee. As a consultant, he developed a blacksmithing studio for the Jackson County Green Energy Park, adapting a gas forge to burn methane recovered from a former landfill site. Over the past decade, supported by grants from the North Carolina Arts Council and Cherokee Preservation Foundation, he was artist-in-residence at several schools, where he and students built collaborative sculptures that remain at the school. 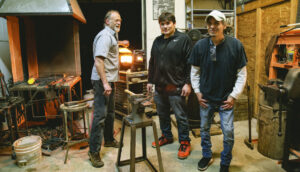 Rogers teamed up with two younger smiths for this project; it was working with the apprentices that helped him learn more about the relationship between metal and culture. “Nathan and JR have helped me learn more about Cherokee visual images and what part they play in telling Cherokee stories,” Rogers stated. “Through working together on the Grandfather Buzzard, they have gained experience in professional metalworking and experience working with a contract and grant obligations.”

From the Snowbird Community, Bush has demonstrated the art of hammered copper at the Oconaluftee Indian Village since 2015. He began working there as a gardener and moved on to become the program coordinator where he supervises the craft workers. He is an expert on medicinal plants, something he learned from his mother and grandmother as he was growing up.

Wolfe is from the Big Cove Community, an area of the Qualla Boundary known for preserving its traditions. An artist all of his life, he has mastered several media, including pottery, basketry, carving, and metalworking. He is best known for his figurative sculptures complete with miniature weapons. After working at the Oconaluftee Indian Village as a historic interpreter for more than a decade, he set out on his own as a full time professional artist.

Monteith added that by including Cherokee talented artisans Wolfe and Bush as apprentices to Master metalworker, William Rogers, it gave tribal members the opportunity to further their interest and skills in revitalizing metal crafting by Cherokee artists, sharing that that “the resulting sculpture represents the level of achievement of these talented artists.”

The Grandfather Buzzard sculpture is now located above the pharmacy lobby in the Cherokee Indian Hospital “river walk” area.