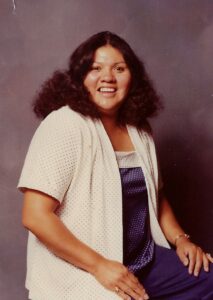 Mary J. Kazhe, of Cherokee, went to her eternal Heavenly home on Oct. 13, 2020. She transitioned from this life to the next, with friends and family by her side.

Mary was born on March 8, 1949 in Swain County. She attended school in Cherokee up until high school. She then attended Riverside Indian High School in Anadarko, Okla., where she graduated. A few years after she graduated, she moved to New Jersey, where she spent close to 30 years of her life and met some of her best friends.

Mary moved back home to Cherokee in 2001 and worked at Harrahs Cherokee for a year. After that, she went to work in the Cherokee Indian Hospital Emergency Room for 15 years, until she retired. She met a lot of amazing people while working at the hospital, including more of her close friends.

Mary, known by many as Ms. Mary, was a very well respected lady. She was a strong, no-nonsense having, very truthful, always on time, caring woman. She loved her friends, family, animals, and traveling. She was so loved and will be missed dearly, but we will reunite with her someday.

Visitation is scheduled for family from 5 p.m. to 6 p.m. and friends from 6 p.m. to 8 p.m. on Friday, Oct. 16 at the Long House Funeral Home, where she will stay until the hour of service at 12 p.m. on Saturday, Oct. 17. Preacher Scotty Chekelelee will officiate. Burial will follow at the Standingdeer family cemetery.