Rex Mann stood in the EBCI (Eastern Band of Cherokee Indians) Tribal Council Chambers ready to give possibly one of the most important speeches of his life. A moment more than three decades in the making that could not be halted by a pandemic or even a stroke.

Mann’s reason for coming to Cherokee was part of a project to save the future of the American Chestnut. This is a species that has been fighting a blight, Cryphonectria parasitica, that was introduced to American soil in 1904 and has systemically decimated the species. The American chestnut is now considered ‘functionally extinct’. 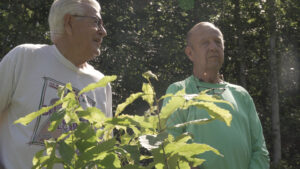 At the publishing of this story, there is a memorandum of understanding being finalized between the EBCI and The American Chestnut Foundation (TACF) to begin work on establishing a chestnut orchard on EBCI land and eventually repopulating the forests with blight-resistant trees.

“It’s been a life’s work, I’m telling you. It’s just really, really, really rewarding and fulfilling. Mostly to just the idea of this. The concept of it. I told the folks on the forestry committee when I made my little talk that it just felt good to be among people that had as close of times to restoring this tree as I do. The Eastern Band has lived with this tree for thousands and thousands of years,” said Mann.

The process was finally gaining serious momentum last year, but then the world stood still for the Mann family. Scott Mann, Rex’s son, remembers his heart dropping when he got the call from his mother telling him his father had a stroke on Jan. 27. Along with his immense personal pain he felt, he thought it was so cruel that his father might have his life’s work taken from him.

“He had a previous battle with cancer. It was all about impact. It was all about legacy. Doing something bigger than himself. Here, he had spent his entire life being a steward of the woods and had built this pinnacle contribution. This budding partnership with the Eastern Band based on a deep spiritual relationship between his father and Cherokee Elder, and then boom. The whole world falls apart, and now he can’t walk,” said Scott Mann.

Scott, a career Army officer who spent 23 years with the U.S. Army, has assisted his father in this project. He knew that it had to be Rex Mann who accomplished this goal, and he trained with him after his stroke in order to get him back to health. Now, Rex is able to walk again. They practiced his speech together all the way until the day he stood in front of EBCI Timber Committee on Aug. 13.

Rex Mann worked for the US Forest Service for 42 years. He served as a land manager and fire fighter at eight different duty stations during his career before retiring in 2007. He has since turned his focus to assisting the TACF, a group he has been a member of for over 20 years. Two years ago, Mann was recorded for a TED Talk on the subject. The TACF was founded in 1983 with the sole purpose ‘to develop a blight-resistant American chestnut tree through scientific research and breeding, and to restore the tree to its native forests along the eastern United States.’ 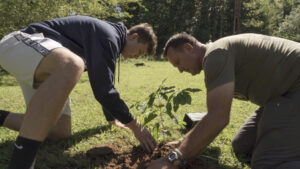 Scott Mann, right, and his son, Cooper, left, plant a chestnut tree on the Sneed’s property.

“Oddly enough, it started up in Minnesota. There was an old retired scientist up there that had spent his whole life breeding disease resistance into corn, and wheat, and oats, and fruit crops. He had heard about the chestnut, how a foreign disease wiped it out. And so, he asked himself the question, ‘why couldn’t we do the same thing with the chestnut tree?’” recalled Mann.

Part of this long-term goal has been to find a host. In order to bring back the chestnut, there needs to be a group willing to offer land and support for the project. This is where the EBCI comes in.

“My hope in all this and the role that the EBCI will play…is to demonstrate to the rest of the world, ‘hey this is the way you do it here. This is the correct way to do it’. Man, they’ve got a forestry program, they’ve got land they own right in the heart of the original chestnut range. They’re perfectly positioned to play that role,” said Mann.

Rex Mann’s connection to Cherokee is an old one. His father, Howard, was close friends with Jimbo Sneed. The pair used to preach together. That friendship lasted until Howard’s passing over 20 years ago. Just last year that generational friendship was reignited. Last December, Rex and Scott Mann visited Jimbo in Cherokee, and they planted three chestnut trees at the Sneed’s property. On that visit, they also got closer to Jimbo’s son, Dike.

Dike Sneed, Tribal Council representative for Painttown and a member of the EBCI Timber Committee, said, “It’s great just finding out there are people out there that want the same thing that we want here and are willing to work with us. In this day and time, it’s hard to find somebody that wants to come in and help anybody on something like this. But then to find out there’s a whole family that’s pushing for it, that’s great.”

The method for creating the blight-resistant tree was developed by Dr. Charles Maynard and Dr. William Powell in 2013. Despite announcing their success in 2013, plenty were still against their method. Many groups, even within TACF, have been anti-genetic engineering in every regard. The TACF concluded that crossbreeding would not be sufficient by itself to bring back the American chestnut, and so adopted Powell and Maynard’s method a couple years after their breakthrough.

Brent Varnadore, a local arborist, has been working closely with Rep. Dike Sneed, the Mann’s, and TACF. He was selected to train extensively for this project in Cherokee. He also founded his own company, WNC Arborcare. The definition of an arborist is a ‘tree surgeon’. They specialize in how to treat and manage trees without hurting them.

Varnadore says that he sees the skepticism behind the movement, but feels it is a misunderstood subject.

“It’s a genetically-modified tree. When you start using that word it scares people. The way it’s genetically-modified is they take an American chestnut tree and an Asian chestnut tree, and they cross-pollinate them in a lab. And in the midst of that they inject wheat gene into the tree, and that is like an immune system booster, like a flu shot. It can combat the blight. When you do that you have to take soil from this area … and you can get it to adapt in a lab. 50% of those chestnuts that tree drops within three to five years when it starts to mature, those chestnuts will be impervious to the blight,” said Varnadore.

He says that they are ahead of the game when it comes to returning the chestnut to Cherokee. He pointed out that many locals rely on the Asian chestnut for nuts in this area. However, Varnadore says they have identified some local groves on Boundary, but the trees aren’t producing nuts. He said that they plan to apply a natural pollen to them next year with hopes of the trees producing by next Fall.

Varnadore has a quote he likes to use, and it has taken root with the Mann’s as well. He credits first hearing it from Bob Webber, a mentor of his and a master arborist, but knows it is an ancient saying.

“There is wisdom in planting a tree knowing you’ll never sit under its shade.”

The current goal for the project is to have a chestnut orchard on Tribal lands by next Spring. Lisa Thomson, the President and CEO of the TACF, said that she has finished the MOU (memorandum of understanding) and it is currently being reviewed. She says this effort is historic, and that it could open the door for tree revitalization.

“It’s more than just the chestnut, it’s a movement that’s bigger than ourselves. Our volunteers reflect that. Some of them are in their late 80s and they’re still planting. Talk about not seeing their shade. They just believe in it that much and they’re passing that along to their family. It’s super inspiring,” said Thomson.

She also said that the TACF will be helping to fund training programs for individuals involved in the project, and they will also be supplying the trees being planted. Other financial terms are still being finalized, and Thomson said there are other possible grants that could assist the program once it’s established.

There is still a chance until Oct. 19 for public comment on the return of the American Chestnut. Thomson and the Mann’s are pleading that anyone who is passionate about this project to write in at https://www.acf.org/science-strategies/biotechnology/documents-for-public-comment-period/.

Rex Mann says this is a huge step, but it is one that needs to be taken now.

“We’re in danger of losing the rest of our native forest. That sounds really severe, but I believe it’s the truth. I think that bringing back this tree will kind of chart a pathway,” said Mann.

“The goal is to see this tree and other trees we’re losing restored to all the land they grew on before. For the good of the country, for the good of our people. I think that has to be the goal. But this is going to be one of the first examples of making that happen and proving to the world that it can be done. The EBCI will be the folks that can take other people out and say, ‘look this is how we did it. This is the work that’s got to be done, and this is how we make it happen.’ We desperately need that.”