On the wall in her office, Monica Wildcatt has a “Dreams List” of all the things she’d like to see at the Cherokee Children’s Home.  A new playground with a fitness component is on that list…and it came true. 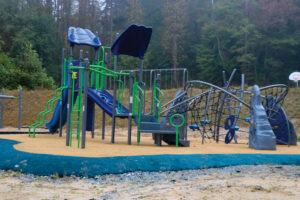 The Cherokee Children’s Home, in the Birdtown Community, has a new playground for the residents. (SCOTT MCKIE B.P./One Feather photo)

“I knew I wanted it to be a commercial-grade project because our kids are very rough on stuff,” Wildcatt, the Home’s director, chuckled as she gleefully described the new playground.  “We have one from Sam’s Club out here, and it hasn’t even lasted a year.”

The playground was finished and released for play on Monday, Sept. 28.  “They were so excited about it,” said Wildcatt.  They had waited for it all summer.  This project has been going on for almost a year.  Seeing the looks on their faces just affirmed that it was the right choice to put our funds towards that playground.”

The playground itself cost around $134,000 and was funded with money raised at the Annual Cherokee Children’s Home Golf Tournament.  “Three of the past tournaments covered most of the project, and we had one private donor who made a substantial donation toward the project as well.”

Wildcatt said that community support is of the utmost importance to the Children’s Home.  “We wouldn’t be able to have extras like the playground without the profits from the golf tournament.  Our funding comes directly from BIA (Bureau of Indian Affairs) grants and state board rates.  Other than that, it’s all private contributions and donations.  We don’t receive funding from the Tribe.  That’s why donations and contributions are so important is because it allows us to provide extras for the kids.”

They average 10 children at the facility which has a capacity of 18.  Originally opened in 1969, the Cherokee Children’s Home has been in its current facility, located off Goose Creek Road in the Birdtown Community, since August 2015.  It is licensed by the N.C. Dept. of Health and Human Services to serve children ages 6-21.

Wildcatt said the Children’s Home’s overall goal is summed up in their mission statement.  “It says ‘to provide a safe and nurturing environment for children that encourages positive values, personal growth, and cultural enrichment’.  Basically, we want to provide a safe place – a place where kids feel safe and don’t have to worry about someone coming in their rooms at night, and they’re warm and they’re fed.”

Last year, the facility celebrated its 50th year in operation.  “I think it is important that we’re still a staple in the community to provide a place here that children can remain close to their family, home, and culture.”

Over the years, the Children’s Home has served approximately 2,000 kids.

“We hope to instill life skills in kids,” added Wildcatt.  “We want them to change cycles.”

For more information on the Cherokee Children’s Home, visit: https://www.cherokeeboysclub.com/cherokee-childrens-home/