CULLOWHEE – The Cherokee Studies Program at Western Carolina University will rename its endowed scholarship in memory of T.J. Holland, an alumnus and lifelong leader in the community and Cherokee cultural preservation and revitalization who died recently. 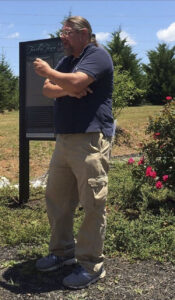 The Cherokee Studies Program at Western Carolina University will rename its endowed scholarship in memory of T.J. Holland, an alumnus and lifelong leader in the community and Cherokee cultural preservation and revitalization who died recently. (WCU photo)

Holland, 44, passed away unexpectedly Sept. 12 at his home in Robbinsville. He was the cultural resources manager for the Eastern Band of Cherokee Indians and served as director of the Junaluska Memorial Museum in Robbinsville.

Brett Riggs, WCU’s Sequoyah Distinguished Professor of Cherokee Studies, described Holland as the bridge between the Eastern Band and the university, the “person who translated academia for his Cherokee community and constituency, and who brought understanding of the perspectives of his community to the academy.” Lisa Lefler, director of WCU’s Culturally Based Native Health Program, recalled he was instrumental in “assisting with our annual medicine walks, elders and clinicians’ meetings, as well as the annual Rooted in the Mountains symposium,” and wrote extensively about the importance of respecting tribal protocols in conducting research in native communities.

In addition to his dedicated work through his many ties to WCU, Holland also served on the EBCI Medical Institutional Review board, the Tribal Historic Properties and Preservation Committee, the Center for Native Health board and the Snowbird Fading Voices Committee.

Holland’s expertise brought him a national reputation as trusted, knowledgeable and willing colleague, and he worked with scholars from across the country conducting research using EBCI resources.

Courtney Lewis, associate professor of anthropology at the University of South Carolina, described how Holland aided her scholarship on the role of small businesses in fostering Native American economic sovereignty. “He took time to work with me and get my feet on the ground,” Lewis said.

Holland also worked with curators, such as at the Smithsonian Institution, to develop guidelines for the management of culturally sensitive Cherokee archival materials and to ensure that Cherokee communities could benefit from access to these collections. “T.J. Holland was an instrumental thought leader in developing best practices for bridging college and community,” said Gwyneira Isaac, curator of North American Ethnology at the Smithsonian. “He helped us museum scholars at the Smithsonian with this critical work with communities, making collections and archives not just available, but accountable to Cherokee values.”

Holland played a similar role with the American Philosophical Society in Philadelphia, which maintains one of the nation’s most important Native American archives. “(He) was instrumental in providing patient and practical guidance to non-native archival institutions on treating culturally sensitive archival materials in ways that are respectful to native communities, guiding old, Colonial-era organizations such as ours down the path to formal agreements with the Eastern Band to protect such materials – the first time our institution ever did such a thing,” said Brian Carpenter, curator of the society’s Native American Materials.

“T.J. was a treasured colleague,” said Ben Steere, Cherokee Studies Program director. “We hope to honor his memory with a scholarship that will encourage and support the next generation of scholars to carry on his work.”

To make a contribution to the T.J. Holland Memorial Cherokee Studies Scholarship, go to https://www.givecampus.com/campaigns/15932/donations/new.