Season 6 of “Osiyo, Voices of the Cherokee People” debuts Oct. 1

TAHLEQUAH, Okla. – The newest season of “Osiyo, Voices of the Cherokee People” debuts this week, showcasing the rich tradition and compelling modern advancements of the Cherokee people told through a documentary lens. 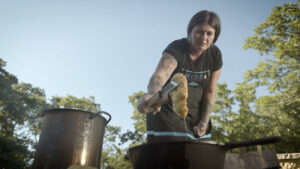 The groundbreaking docuseries features the culture, history and language of the Cherokee Nation and has been recognized with nine regional Heartland Emmy Awards. Season six debuts on Thursday, Oct. 1, at 7 p.m. on osiyo.tv, followed by a broadcast premiere on Sunday, Oct. 4.

“Osiyo, Voices of the Cherokee People” has proven to be a hugely impactful series for Cherokee Nation citizens. Through the award-winning episodes, Cherokee Nation has assumed the responsibility of authentically telling the story of our people, heritage and history,” said Cherokee Nation Principal Chief Chuck Hoskin Jr. “Not only is it entertaining for Natives and non-Natives alike, it’s a preservation of our culture and will be a historical record for future generations. Too many elders have passed without having their stories told, and through OsiyoTV we are able to preserve so many of those memories. We are so proud of what this series has done and will do for the Cherokee Nation.”

The new season will thrill viewers with stories of modern Cherokees blazing trails and taking a stand for social justice and activism through art. Viewers will learn traditional Cherokee values from culture keepers such as storytellers and explore Cherokee traditions that have been passed down from generation to generation. Plus, they’ll get to ride along in a race car with a driver whose need for speed had him racing before he could even legally take a car to the Oklahoma streets.

“We couldn’t be more excited to share season six with the world,” said Jennifer Loren, executive producer and host for OsiyoTV. “Our producers’ creativity shines in each and every story, and their talent as storytellers prove an invaluable resource for sharing the Cherokee perspective. Whether we are sharing little-known or misunderstood parts of our culture and history, showcasing the accomplishments of a Cherokee Nation citizen, or proudly highlighting the advancements of our tribe, each and every story has the capability of having a profound impact on a fellow Cherokee, neighbor, friend, community member or stranger. There’s a lot to love about the Cherokee Nation and its people, and we can’t wait to share more of who we are with the world.” 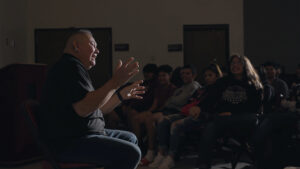 Discover storytelling as an art form mastered by Cherokee National Treasure Choogie Kingfisher with his own brand of Cherokee humor.

In addition to its season six debut, OsiyoTV is also premiering the first-of-its-kind, interactive Cherokee history timeline on osiyo.tv that explores important moments in Cherokee history, from pre-European contact to present. Website visitors can identify any century of interest and learn more about specific events on the timeline by accessing short videos, historic images and original documents. The interactive timeline is a great resource for classrooms and individuals interested in learning more about the history of the Cherokee people.

“The history of the United States and that of the state of Oklahoma cannot be told without also considering the history of the Cherokee Nation,” Loren said. “Preserving our culture means sharing it with the next generation, and we must do everything we can to ensure that it is shared in a way that is not only accurate, but also authentic to the Cherokee perspective. The interactive timeline provides an easy-to-understand, entertaining way to access Cherokee history, and we hope it will encourage everyone to dive in and learn more.”

OsiyoTV is available statewide on PBS in Oklahoma and Arkansas, regionally within Tulsa on RSU-TV, in Joplin on NBC and ABC, as well as on FNX, an all-Native programming network in 20 national markets. The show is formatted for multiple platforms, including osiyo.tv, YouTube, Vimeo, Facebook, Twitter and more. It is funded and produced by Cherokee Nation Businesses.

For more information and to watch “Osiyo, Voices of the Cherokee People,” please visit osiyo.tv.