COMMENTARY: Photography is art one second at a time

One of my favorite movies is “The Secret Life of Walter Mitty” – I’m a sucker for the sappy.  In that movie, Walter, played by Ben Stiller, has an interesting conversation with famous photographer Sean O’Connell, played by Sean Penn, as Sean is about to take a photograph of the rare snow leopard. 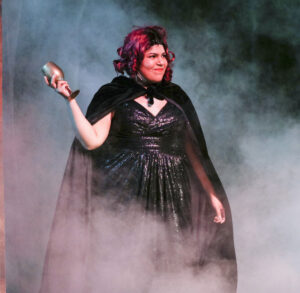 Ella Montelongo, a senior at Cherokee High School, is shown in the part of the Witch in the Cherokee Performing Arts production of “Into the Woods” on May 2, 2019. Remember to celebrate life one second at a time. (SCOTT MCKIE B.P./One Feather photo)

It goes as follows,

Walter: “When are you going to take it (photo)?”

Sean: “Sometimes, I don’t.  If I like a moment, for me, personally, I don’t like to have the distraction of the camera.  I just want to stay in it.”

As a person who takes a lot of photographs, I understand Sean’s point.

Sometimes, when I am covering a game, a special event like the Kituwah Celebration, or a stickball game at the Cherokee Indian Fair, I get lost in the moment.  I still do my job and get photographs of the events, but every now and then I just want to witness the event myself – stay in it.

Photography is an art form.  Many people think it is simply pointing a camera at something and pushing the button.  Bada bing, bada bang – photography.

Well, many people approach it like that, and all they end up with is a bunch of pictures that lack emotion, depth, history.  Photography is an art form that captures life one second at a time.  When you look at the photos I take, none of those moments will ever occur again.  You could get the same people in the same spot at the same time of day, month, and year, and you still will never get that moment back.

That’s why photography is such an important art form.

These days, most people carry around a camera with them all the time  in the form of their phone so photos are more prevalent now than they ever have been in the history of the world.  But, how many people take the time to frame their shots and truly try to make art?  How many people simply point and click to have something quick to post to their social media accounts?

Photography is about individual moments of time.  Sure, there are times when a simple photograph will work.  Sometimes, I am called upon to take group shots for different events, and those have no real artistic value.  I am just there to get the shot – make it clear and make it fast.  Anyone that knows me, knows I don’t care for posed photos.  I much prefer candid – they are real, they are live, and they are timeless.

The late Ansel Adams was one of the most famous landscape photographers in history.  He once said, “You don’t make a photograph just with a camera.  You bring to the act of photography all the pictures you have seen, the books you have read, the music you have heard, the people you have loved.”

Elliott Erwitt, a French-born American photographer who was presented the Royal Photographic Society’s Centenary Medal in 2002, once noted, “To me, photography is an art of observation.  It’s about finding something interesting in an ordinary place…”

So, if you see me at an event and I am not snapping shots but watching for a bit, you’ll know I am caught in a moment.  Put your phones down every now and then and get lost in life’s moments – even if just for that time, those few seconds.

I’ll leave you with my favorite quote from the above-mentioned movie.  Cheryl Melhoff said, “Life is about courage and going into the unknown.”

Get out into that unknown, photograph those moments, and celebrate life one second at a time.