Fall Brawl about wrestling and so much more

Sometimes, those who report on sports get to cover events that transcend what occurs on the athletic field.  The 3rd Annual Fall Brawl Under the Lights – a wrestling and Brazilian Jui-Jitsu tournament held on the field at Ray Kinsland Stadium on the evening of Saturday, Sept. 21 – was one of those events. 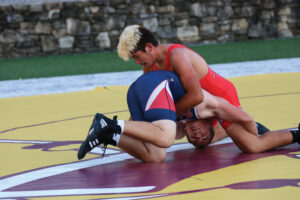 Brayden Taylor, top, a member of the Eastern Band of Cherokee Indians and the CHS varsity wrestling team, wrestles against Josh Jones, West Henderson H.S., during the 3rd Annual Fall Brawl Under the Lights on the field at Ray Kinsland Stadium on the evening of Saturday, Sept. 21. The event was held as a fundraiser for the Sgt. S. Matthew Baynard Foundation for the Advancement of Amateur Athletics. (SCOTT MCKIE B.P./One Feather photos)

The event was a fundraiser for the Sgt. S. Matthew Baynard Foundation for the Advancement of Amateur Athletics which provides wrestling and other sports equipment free of charge to underprivileged children.  According to the Foundation’s website, Sgt. Baynard passed away in July 2012 “from complications stemming from injuries he suffered during deployment in Iraq, serving with the Army, but was not deployed at the time of his death”.  He served with the 201st Battlefield Surveillance Brigade stationed at Joint Base Lewis McChord in Washginton state.

“He was a lifelong wreslter, and he constantly gave away things,” Cheryl Baynard, Matthew’s mother, said.  “He gave away his shoes.  He gave away his singlets.  So, when he passed away, we found ourselves with a lot of extra stuff, and we gave it to the schools that needed it, and we became known as the people to contact if you needed wrestling shoes.  And, that’s sort of how we started.”

The Foundation has now hosted three Fall Brawls with the first two being held at West Henderson and Asheville High Schools respectively as well as holding an annual 5K on Veteran’s Day in Mills River and a baseball tournament near Matthew’s birthday in July.

“We help kids who can’t afford to play sports,” she said, “whether you need help with karate lesson registration or wrestling shoes or football cleats.  We send kids to national clinics and camps.  All they have to do is email us, and we try to help as many as we can.”

The family wanted to use the loss of their son as a way to both remember his memory and sacrifice while keeping his legacy of helping others as well as his love for wrestling alive.  “We have a son who is a senior, so we’re still involved in wrestling,” Cheryl noted.  “It’s sort of always been our thing.  We’re a wrestling family more so than a football family or a baseball family.  So, it just sort of came naturally to us.” 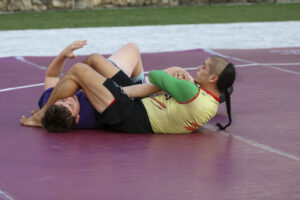 Kerry Reed, a member of the Eastern Band of Cherokee Indians, finishes a match against Tucker Limburg, from Hendersonville, with an armbar submission in the Brazilian Jui-Jitsu tournament portion of the event.

The tournament came to Cherokee via a friendship that developed between Cheryl’s son, Alec, and Brayden Taylor, a member of the Eastern Band of Cherokee Indians from the Wolftown Community, who is a member of the CHS varsity wrestling team.  Bill Taylor, Brayden’s father, said the two met five years ago and have traveled all over wrestling.

“They traveled to Indianapolis and wrestled in the U.S. Nationals representing the State of North Carolina,” Bill said.  “Ever since then, they’ve wrestled together every spring and summer, and now they’re on the same club team in Hendersonville.”

He said that Cheryl approached him about the event held Saturday evening.  “They wanted to come to Cherokee, and we accepted and hosted it for them.  It’s for a good cause as they’re able to help underprivileged kids, and we receive some money back to help our local high school wrestling team.  It’s a win-win for everybody.”

Cheryl Baynard praised Cherokee High School’s work with the event.  “They did everything.  They set up the mats.  They set up the tables.  We literally just walked in here with a  printer, a laptop, and a set of scales.  It’s very nice to see the home team get involved.”