Waning numbers and increased competition from other events have caused the organizers of the annual Cherokee Safe Trick-or-Treat Night to cancel this year’s event.  In its place, individual Community Clubs within the Eastern Band of Cherokee Indians (EBCI) are set to host their own events – something some have already started in the past few years. 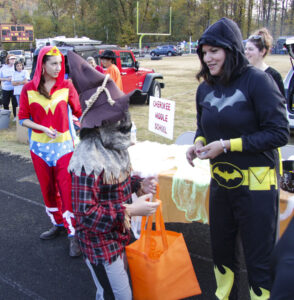 Kelsey Owle, as “Batgirl”, hands out candy to a scary scarecrow at the Cherokee Middle School booth during the annual Cherokee Safe Trick-or-Treat Night event at the Acquoni Expo Center on the evening of Thursday, Oct. 31, 2016. This year’s event has been cancelled in lieu of community clubs having their own events. (SCOTT MCKIE B.P./One Feather photo)

Radonna Crowe, EBCI Public Health and Human Services public relations specialist, has been involved with planning the event since its inception 19 years ago when the late Rod Cooper, a DARE officer within the Cherokee Indian Police Dept., sought to create a safe event for area kids.  “It was created for kids to have a one-stop-shop and a safe place to trick-or-treat,” said Crowe who noted that it is many times very difficult to trick-or-treat in Cherokee due to many factors including distance between houses.

She said that the event grew over years, but interest and community participation has waned in the past few.  Following are numbers provided by Crowe that show the five-year trend for the event:

Crowe made the announcement to the public during the monthly Tribal Council Health Board meeting on Wednesday, Sept. 18.  “We met with Community Club Council last Monday, and they were all in favor of having their own events in their community clubs on Halloween so they will having their trunk-or-treats and Halloween parties on Thursday the 31st of October.”

Crowe further told the One Feather that when community clubs host their events, that takes away some of the volunteers needed for the event.  “The community clubs are having their community events and trying to create a sense of community involvement, and that’s great.”

She added, “People can get involved in their communities.  We just wanted to give them the opportunity to have their event and community involvement.”

In looking back on the event over the years, Crowe said, “It’s been fun.  I love the event.  It might just be time to try something different and let the communities take ownership of Halloween events.”

And, she did leave with, “If it doesn’t work out, we can always bring it back.”

As of press time, a schedule of community club Halloween events is not available.  Several communities have stated they will have events, but those aren’t planned out entirely yet such as Big Cove will host its outdoor Kolanvyi Karnevil at the Big Cove Stickball fields, and Big Y is deliberating several options and will make an announcement soon.  The One Feather will report all community club and area Halloween events as they become available to us.