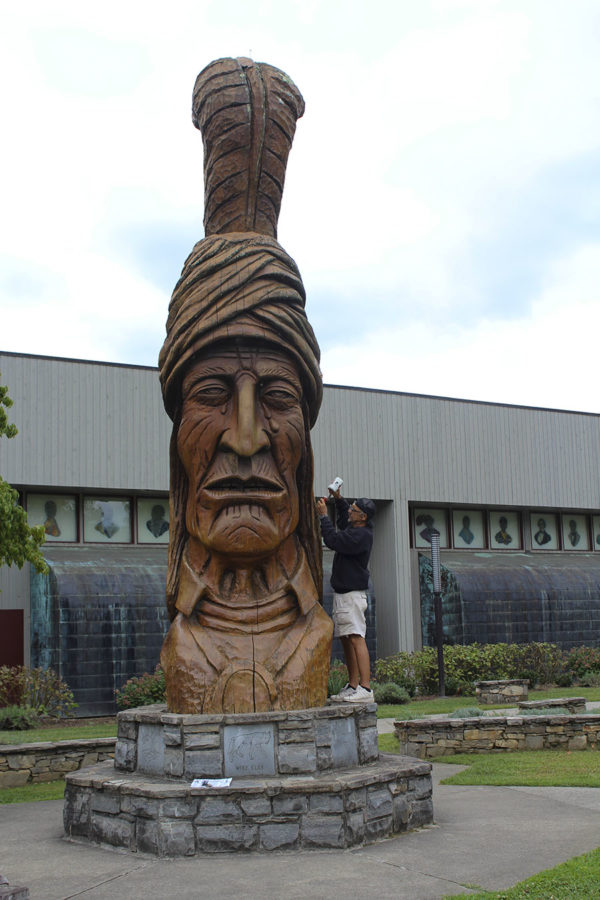 Peter Wolf Toth begins work on refurbishing the Sequoyah statue in front of the Museum of the Cherokee Indian on the afternoon of Thursday, Sept. 19. He completed the statue almost 30 years ago. (SCOTT MCKIE B.P./One Feather photos)

Chisel in hand, a noted sculptor and artist climbed atop a piece that was dedicated in Cherokee nearly 30 years ago.  Pete Wolf Toth, creator of the giant Sequoyah statue that has sat proudly in front of the Museum of the Cherokee Indian since September 1989, began work on refurbishing the work and giving it a facelift on the afternoon of Thursday, Sept. 19.

Born in Hungary, Toth immigrated to the United States when he was a child; his family settling in Akron, Ohio.  “I’ve always had a great admiration for Native people, and I found out what they don’t teach in school – of all of the atrocities and the terrible things that happened to the Native people.” 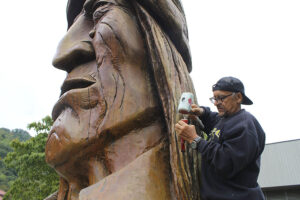 The idea of carving giant statues recognizing and honoring Native Americans formulated in Toth’s mind since he was young.  While in California after having left the University of Akron, he was inspired by a cliffside in which he saw the image of a Native man. Several months later, he had finished the first of what would come to be known as his Trail of the Whispering Giants – a total of 73 giant wood and stone carvings in all 50 U.S. states as well as some in Canada and one in his homeland of Hungary.

That first carving was made at Wind & Sea Beach in La Jolla, Calif. and is entitled “Scarfaced Indian”.  His next one was in Akron, Ohio followed by Deland, Fla. and so on and so on.

Toth sees faces in the medium that he uses, and he lets each statue or carving take shape, literally, on its own accord.  For his second carving, in Akron, he described looking around for a large stone similar to the one he carved in California.  “I was driving through a park and I saw a dead elm tree, and I figured, well, if I can’t find stone, I’ll use wood.  Not only that, I think it’s more poignant and more representative of Native Americans because everything living is honored and respected by Native culture…I intertwined the spirit of the tree with the spirit of the Indian.” 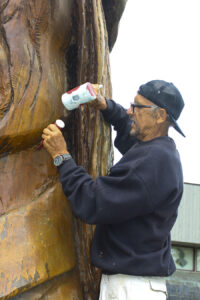 The Sequoyah statue is number 63 on his list.  Toth was invited to make a statue to honor Cherokee people by the late Beloved Man Principal Chief Robert S. Youngdeer.  The placard which sits in front of the statue to this day states it was carved from “a single, giant California Sequoi (Redwood) log which was donated and shipped by Georgia-Pacific”.

All of his statues are different and vary in size, appearance, and complexity, “Some of this size took up to half a year, and I remember this took less.  Some of the statues are more simple, some are more intricate.”

Of the refurbishment of the Sequoyah statue, he said. “When I work on one of my statues, I check primarily first for decay and other associate problems.  My plan here is to give it a total overall facelift, and I will look very carefully when I get to the top to make sure there aren’t any problems that would endanger its longevity.”

He said the refurbishing process usually takes from two to six weeks.  “It appears to be in very, very solid shape.”

Toth plans to continue working on new additions to his Trail of the Whispering Giants in places like South America, India, Cambodia, Africa, and more.  “They are all representative and honoring of the Indigenous people of a state, a province, a country, or an island.”