FOOTBALL: Braves cruise to first win of the season 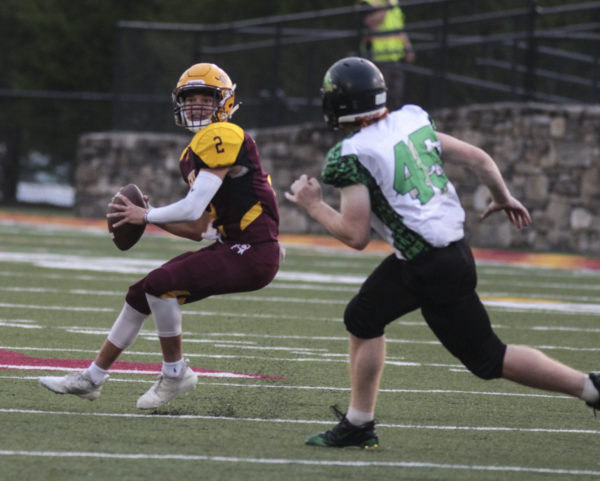 Don Bradley (#2), Braves sophomore quarterback, lines up for a throw as Gladiator Sports Academy’s Asher Foskey, sophomore linebacker, defends during a game at Ray Kinsland Stadium on the evening of Friday, Sept. 13. On the night, Bradley went 6 of 10 passes for 73 yards and two touchdowns. (SCOTT MCKIE B.P./One Feather photos)

Cherokee got off to a quick start and never looked back in its 42-0 win over the Gladiator Sports Academy at Ray Kinsland Stadium on the evening of Friday, Sept. 13.

The Braves (1-3) were set up at midfield on their first drive after a big return by sophomore Malakai Fourkiller-Raby. Then, senior running back Jaden Welch broke out for a 22-yard run on the first play from scrimmage. The very next play sophomore quarterback Don Bradley found Jonathan Frady for a 28-yard touchdown strike. Frady shook loose and was wide-open along the right sideline, making it an easy toss and catch.

The defense for Cherokee was just as impressive as the offense, forcing a three-and-out on their first drive. The Gladiators (0-3) had no answer.

After the offense was forced to punt on their next possession, Welch pinned the Gladiator’s inside the ten on a great kick. The defense continued to be relentless, and junior linebacker Braden Taylor caught the ball carrier in the end zone for a safety. This quickly made the score 9-0.

The Braves kept their foot on the gas and returned the following kickoff to the opposing 36-yard line. A holding penalty on first down brought the ball back to the 46, but that only helped Bradley’s statistics, as he took off on a big-time touchdown run. He weaved through the defense and broke right to use his speed for the long score.

It was more of the same for Cherokee the rest of the half, with a powerful defensive effort offering great field position for the offense.

Welch, who finished the game with 71 yards on 10 carries, found pay dirt on a 1-yard run to start the second quarter, making it 23-0. Welch also scored Cherokee’s only touchdown in last week’s game against Smoky Mountain.

The Braves next drive stalled at the 13-yard line, but junior kicker Rocky Peebles was true, nailing the 30-yarder with room to spare.

Peebles was great on the night, finishing 4-for-4 on extra points and 2-for-2 on field goals. His second chance at three points came right before halftime, where he hit a 26-yarder with just three seconds left on the clock. This brought the score at the half to 29-0. 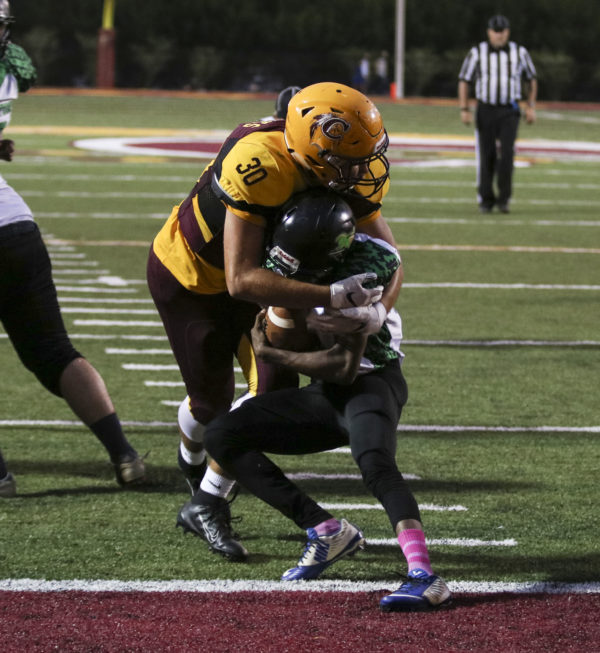 Cherokee’s Braden Taylor (#30) tackles a Gladiator runner in the end zone for a safety in the first half.

Cherokee continued its dominance in the second half as well.

After the defense forced another three-and-out, a nice punt return set the Braves up at the Gladiator 31. Bradley ran for 11 yards, and penalty tacked on another 10 to put his team at the 10 yard-line. Two power runs by Welch gave him his second touchdown on the evening, and pushed the score to 36-0.

Cherokee quickly got the ball back, and it was almost all Fourkiller-Raby. He ran seven times for 39 yards on the drive before Bradley tossed a 5-yard touchdown to freshman Kaden Trantham. A botched snap and hold on the point after attempt meant the score was now 42-0.

On the following kick-off, there was a scuffle between multiple players on each team. Fists were thrown and whistles blared. Eventually, the teams were sent to their sidelines and the coaches and referees had a conversation on the field. After a couple minutes, the officials signaled that the ballgame was over with 24.5 seconds left in the third quarter.

It also allowed for the playmakers to do just that, make plays. Bradley had a much more composed game this week completing 6/10 passes for 73 yards and two touchdowns, two of those incompletions were drops. He also ran for 84 yards and touchdown on just 8 carries.

Cherokee ran for well over 200 yards in those three quarters. Bradley had his 84, Welch with his 71, and Fourkiller-Raby added another 70.

The Braves will be heading to Gray, Tenn. next week to take on Trinity Academy. The Knights (1-2) won their first game of the season over Andrews 42-36 in triple overtime, and are coming off a bye week.