For over 11,000 years, Cherokee feet have danced on the ground of the mountains in western North Carolina.  That proud tradition of dance is being recognized. The Grand Marshals for the Cherokee Indian Fair Parade on Tuesday, Oct. 8 will be dancers of the Eastern Band of Cherokee Indians (EBCI). 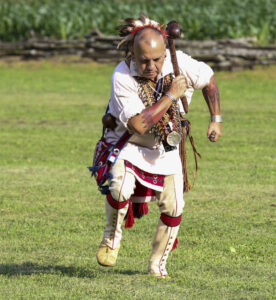 Sonny Ledford, a founding member of the Warriors of Anikituhwa, dances at the 22nd Annual Kituwah Celebration on the evening of June 21. (SCOTT MCKIE B.P./One Feather photos)

According to parade officials, this will include all EBCI tribal members who do Cherokee traditional dances as well as those who do pow wow style dancing and hoop dancing.  Everyone, young and old, who does traditional Cherokee dances and pow wow dances are invited to walk as a Grand Marshal in the Parade.  Cherokee dances include stomp dancing as well as social dances such as: Horse, Buffalo, Frog, Corn, etc.

Over the last 15 years, one group has been a champion for helping to bring awareness and revitalize interest in those dances.  The Warriors of Anikituhwa, a group of EBCI tribal members performing traditional Cherokee dances, brought back a 1700s style of dress to the Tribe when they formed in 2004.

They are the official cultural ambassadors for the Tribe and have traveled far and wide spreading the culture, dances, and songs of the Eastern Cherokee including a trip earlier this year to London, England where they participated in the coveted London New Year’s Day Parade.

“Our elders chose us to travel and educate the public on who we are,” said Sonny Ledford, an original member of the Warriors of Anikituhwa, in an interview for visitcherokeenc.com.  “A lot of people, you hear them say ‘Cherokee pride’, or ‘I’m proud to be Cherokee’, but the Cherokee never had pride.  They had honor.  When you’ve got honor about being created the way you have, and having language and culture, and ceremonies – all those things that haven’t changed – it’s an honor to be gifted with those things and pass them on.” 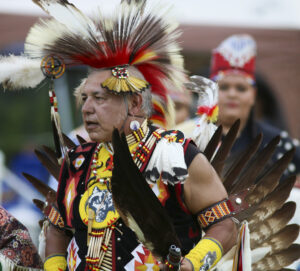 Rick Bottchenbaugh, an EBCI tribal elder from the Big Cove Community, dances in the grand entry as the head man dancer at the 44th Eastern Band Cherokee Pow Wow on the evening of Friday, July 5.

While there is an honored tradition of Cherokee dances among the Tribe, the EBCI boasts some top-notch pow wow dancers over the years.

Eddie Swimmer, an EBCI tribal member of the Big Cove Community, was the first-ever World Hoop Dance Champion and was an inaugural member of the famous American Indian Dance Theatre (AIDT) in the late 1980s.  Tribal members Ernest “Beaver” Grant, Tooter Owens, Will Tushka, and Jonathan Dane Feather later joined the AIDT traveling the world.  All of them were able to share parts of their Eastern Cherokee culture, heritage, and history with their fellow AIDT performers as well as with their audiences.

Pow Wow styles include the following: