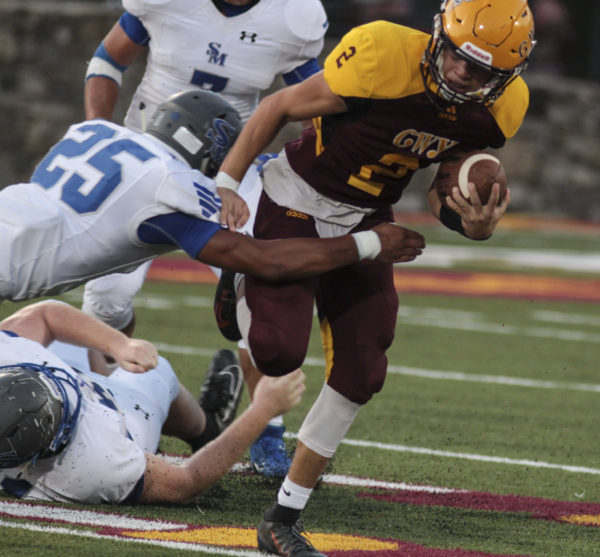 Cherokee held strong early in the game, but a second quarter burst by Smoky Mountain buried the hosts. The visitors went on to a comfortable 49-7 victory at Ray Kinsland Stadium on the evening of Friday, Sept. 6.

The Braves (0-3) defense was able to take advantage of some early mistakes by the Mustangs (1-2) in the first quarter. A major issue for Cherokee, though, was the absence of senior quarterback Bobby Crowe, who was out of the game with a knee injury.

Sophomore Donald Bradley took the helm for the Braves in this game, and it was a tough outing for him and the offense. They opened the game with three punts, and it was only an uphill battle from there.

Smoky Mountain scored on their first drive with a 38-yard touchdown catch from Dustin Stephens. The play came immediately after the Braves defense had jumped offsides on 4th and 1.

The Mustangs had struggled with penalties and turnovers in their previous two games this season, and that’s what stalled them on their next two drives in this game. These are mistakes that Smoky Mountain addressed, and the second quarter is when the floodgates opened.

After Bradley turned the ball over on a fumble, the Mustangs doubled their lead with a fantastic catch and run by Darien Bird. The sophomore was lethal all game, making multiple big-time catches.

Smoky Mountain went on to score 28 points in the second quarter, making the score 35-0 at the half. 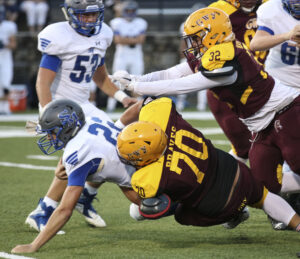 After Cherokee pinned the Mustangs inside the 10-yard line on a good punt, Smoky Mountain’s star athlete Stephens broke out for an 87-yard scamper. The junior continued to shine in the quarter, scoring two more times. Once with a nice 21-yard run, and the other was on a 91-yard burst right before halftime.

The Mustangs opened the second half with yet another touchdown from Stephens, bringing him to five touchdowns on the night. This brought the score to 42-0 and began the running clock for the rest of the game.

The Braves showed quality glimpses in this game, however. AJ Allison looked quick and difficult to bring down, and he showed a lot more than his 8 rushes for 9 yards. Allison was the most dangerous player for Cherokee throughout the game. He also had a 67-yard kick return to the opposing 23-yard line.

Bradley was under relentless pressure the entire game, but he had a few throws that showed his talent. He finished 4 of 7 on passes for just 5 yards and an interception. It didn’t help that his best play was wiped away because of a penalty. The ball was snapped over his head, he scrambled to pick it up, and launched the ball to find senior tight end Sterling Santa Maria to seemingly convert a big fourth down. Bradley also carried the ball 7 times, but was caught deep in the backfield on multiple occasions. That forced his total to -7 net yards to go with 2 lost fumbles.

Cherokee got the last points on the board, though. After a botched snap on a punt attempt, the Braves dragged down the punter at Cherokee’s own 4-yard line. On the very next play, senior running back Jaden Welch sliced through the defense for the Braves lone score of the evening. Welch finished with four carries for 11 yards and the score.

It’s been a difficult start to the season for Cherokee, and a tough conference schedule isn’t too far away. First, they will host Gladiator Sports Academy next Friday, Sept. 13.