Yona Wade, Cherokee Central Schools director of community affairs, will receive the Indigenous Excellence Award from the American Indian Science and Engineering Society (AISES) at their National Conference in Milwaukee, Wisc. on Oct. 10-12.  The award is part of the organization’s Professional Awards Program.

“Every year we get high caliber nominations for our Professional Awards,” says AISES Board Chair Rick Stephens. “We honor the best who are the current and future leaders of STEM professions and academia. Often these individuals are taking Western science and merging it with Indigenous knowledge. They are inspiring a ‘new’ generation of STEM scholars in a period where the speed of technology is outpacing normal constraints. We need leaders in STEM and this year’s award recipients are the Indigenous talent on the rise.” 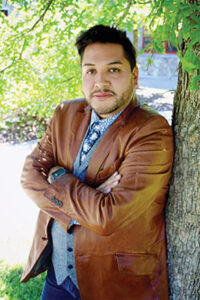 Sarah Echo Hawk, AISES chief executive officer, states in a release, “This year’s awardees lead by example and honor their families, communities, and heritage, as well as setting a high bar in achievement and ingenuity for others.  We hope by recognizing their contributions to STEM, it will motivate more and more Native students to ask how things work and shape their paths in education.”

The Indigenous Excellence Award acknowledges individuals who have done substantial work to advance program and opportunities for Indigenous students and professionals in STEM education and careers.  Wade, a member of the Eastern Band of Cherokee Indians (EBCI), has a Bachelor of Music degree in voice and a Master of Fine Arts degree in performing arts management, both from the North Carolina School of the arts.  He uses his voice degree by offering free voice lessons to the students in the Cherokee Central Schools Performing Arts Program.

He also serves as chairman of the EBCI Pageant Board working with young ambassadors of the EBCI, and he is a founding member of the Qualla Education Collaborative which is a school and community collaboration made up of educators, tribal community leaders, and other partners who each have a stake in improving the education outcomes of the EBCI students.

Other award recipients include: