If you’re planning to pass through Waterloo, Ala. on Saturday, Sept. 21, best of luck with that.

Upwards of 28 miles of motorcycles will be riding in the 26th Annual Trail of Tears Commemorative Motorcycle Ride. This event was started to educate people about the Trail of Tears. The ride takes place on what is now US Highway 72, which runs along the Drane/Hood Overland removal route.

Ike Moore, the president of the Trail of Tears Corridor Association, begins his ride in Cherokee. Years ago, he met some riders from the Eastern Band of Cherokee Indians (EBCI), namely Ned Stamper, who helped him facilitate starting in Cherokee, N.C.

“The main thing is to bring awareness to the Trail of Tears and keep the public informed, so it won’t be forgotten,” said Moore.

He began taking this annual journey in 2003 with his wife. He was inspired by the movement in 2002 but didn’t have a motorcycle at the time. That next year was his first time on the ride, and he hasn’t missed one since then. In 2004, he made the full trip to Oklahoma. After putting in over a decade of riding and meeting the founders of the organization, he was made President. He says that he does his best to maintain the original purpose of the ride. 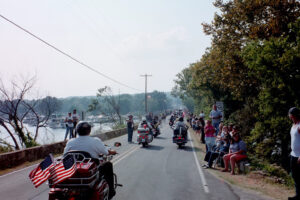 Upwards of 28 miles of motorcycles will be riding in the 26th Annual Trail of Tears Commemorative Motorcycle Ride on Saturday, Sept. 21. This event was started to educate people about the Trail of Tears. Shown in the photo above are bikes from a previous year’s ride. (Photo courtesy of Rod Wheeler)

“I remember in grade school studying Alabama history, the way the teacher explained to me being a fourth or fifth grader, it gripped my heart,” said Moore.

“What that teacher said was, ‘boys and girls, it’s not like these were savages. These were civilized people. It would be just like if you and your family were eating dinner tonight, and a group of soldiers come to the front door and got you all out of the house and took you away with nothing more than the clothes that were on your back.’ That made an impression on that elementary kid.”

Ms. Johnson was her name, and she is greatly responsible for Moore’s passion for this project today.

The official kick-off of the ride begins on Sept. 21 at 8 a.m. out of Bridgeport, Ala. There, the riders take off with a police escort. Thousands of riders join them along the way to Waterloo, which is the main stretch of the event. Many continue to Oklahoma with the leaders of the ride.

Moore says that last year they left Bridgeport with about seven to eight thousand riders, and by the time they reached Waterloo that number had escalated to approximately 12,000. There were about 60 that started from Cherokee with Moore.

The concept of this event came from Jerry Davis. After studying his Cherokee lineage and culture, he felt compelled to do something about the lack of respect paid to the Cherokee people in Alabama. He also learned that the Drane/Hood Overland removal route ran directly through Scottsboro, AL, where he lived. He has worked for years to establish this ride and is extremely important for its fast growth.

“In about 1998, I saw it growing so exponentially … I just said, ‘I can’t believe it, how could we start as this small group and multiply this way?’,” said Davis.

Davis said that in his experience, motorcyclists like to help you when you stand for something.

“It wasn’t just a motorcycle rally; this is riding for a cause. And to commemorate a dark chapter in American history,” said Davis.

It wasn’t as simple as just hopping on a bike and going for Davis, though.

“This started with legislation. I got this through both houses of the Alabama legislation, the house and the senate. And they drafted a joint house resolution and declared this trail and some other trails in Alabama the Trail of Tears Corridor of Alabama,” said Davis.

There were just seven of them that took off the first year, and they picked up about 150 along the way. Rod Wheeler was one of those first riders.

“My kids were going through school, this was back in the early 90s, and they didn’t even have anything written up in the history books about the Trail of Tears. It’s like it never existed,” said Wheeler.

He said that when he was helping Davis and the others plan the first ride, they had no idea what to expect in terms of numbers.

“We figured that we’d be lucky if we’d ever had 1,000 people riding in the motorcycle ride, but we exceeded that the second year,” said Wheeler.

Rod Wheeler, who served as President of the association for years but is now the Vice President, has been on every single ride. Davis has decided to step away from participating in the trip itself, which has opened the door for the likes of Moore to carry on the tradition.

Something that Moore has been sure to continue is the markers that they post along the trail.

“They’re historical markers, and they tell the story of the Trail of Tears. We have one at Ross Landing in Chattanooga, several different campsites along the route are marked, and in Oklahoma, at each one of the five tribes.”

The ride has only continued to grow, and with new people happy to step into leadership roles, it doesn’t look to stop any time soon. Moore says that he hopes that people focus on why Davis started the ride in the first place and that they can continue to educate as many people as possible.

“My hope, and the reason I do all of this, is that some little kid is going to be standing on the side of the road with his daddy and the motorcycles come rolling by, and the kid will say, ‘well daddy, why are all these motorcycles going down the road?’ And that we’ve done a good enough job educating that daddy will know and tell that kid why,” said Moore.