Congresswoman Deb Haaland (D-N.M.), a citizen of the Pueblo of Laguna, has made history by becoming the first Native American elected to serve as the vice chair of the full committee for the House Natural Resources Committee.  One of the first Native American women in Congress, Rep. Haaland was elected to the committee position on Tuesday, Jan. 29.

“Our deep respect for our land, air, and water are at the heart of why my seat on the House Natural Resources Committee is so important to New Mexico,” she said in a statement.  “Those issues are even more important because they intersect with job creation through the renewable energy and outdoor recreation economies.  I am honored, as a freshman, to be elected to these leadership roles.” 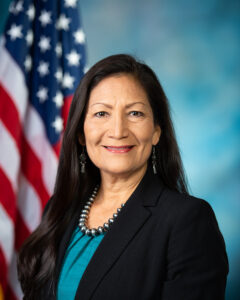 Congresswoman Deb Haaland (D-N.M.), a citizen of the Pueblo of Laguna, has made history by becoming the first Native American elected to serve as the vice chair of the full committee for the House Natural Resources Committee. (Official Congressional photo)

Rep. Haaland chairs the House Subcommittee on National Parks, Forests and Public Lands and sits on the newly-created Subcommittee for Indigenous Peoples of the United States (formerly the Indian, Insular and Alaska Native Affairs Committee).

Speaking of her subcommittee chair, she said, “Hiking, camping, and our historic sacred sites are part of who we are as New Mexicans, and also attracts folks from across the globe to our beautiful state.  Being chair of the House Subcommittee on National Parks, Forest, and Public Lands means I will be able to work directly on protecting our way of life and important economic drivers.”

Congressman Ruben Gallego (D-Ariz.) was named chair of the House Subcommittee for Indigenous Peoples of the United States and said in a statement, “As chair of the Subcomittee for Indigenous Peoples of the United States, I look forward to working with my Democratic and Republican colleagues to find solutions to the pressing issues facing our American Indian and Alaska Native communities.  We must work together to improve access to health care, justice, education and sustainable economic growth, to safeguard tribal water rights, and to protect sacred cultural and historical lands.”

He said he is committed to working with leaders in Indian Country on those goals “while advancing economic self-sufficiency, environmental justice, and tribal sovereignty.”

Congressman Raul M. Grijalva (D-Ariz.) will serve as chair of the House Natural Resources Committee, a committee he has served on since 2003.  He said in a statement on Tuesday, “Protecting our environment, taking climate change seriously, and putting the public interest first are not optional for this Committee, and that’s what Democrats are going to do every day for the next two years.  The American people want clean air and water and public lands protected for the future.”

The rest of the leadership team for the House Natural Resources Committee is as follows:

For a listing of current bills before the House Natural Resources Committee, visit: https://naturalresources.house.gov/legislation/bills

In other news, Rep. Haaland will co-chair the Congressional Native American Caucus with Congressman Tom Cole (R-Okla.), a citizen of the Chickasaw Nation of Oklahoma.  “Long before the United States came to be, tribes greatly influenced the land in which we live.  While the federal government has at times have a strained relationship with Indian Country, I am encouraged that efforts have been made to repair and improve it over the years.  To ensure that work continues, the Congressional Native American Caucus remains a vital body in the House for educating members on tribal sovereignty and improving the lives of Native Americans.”

Vice chairs for the Caucus were named including: