ON THE SIDELINES: The world needs more like Jacee Smith 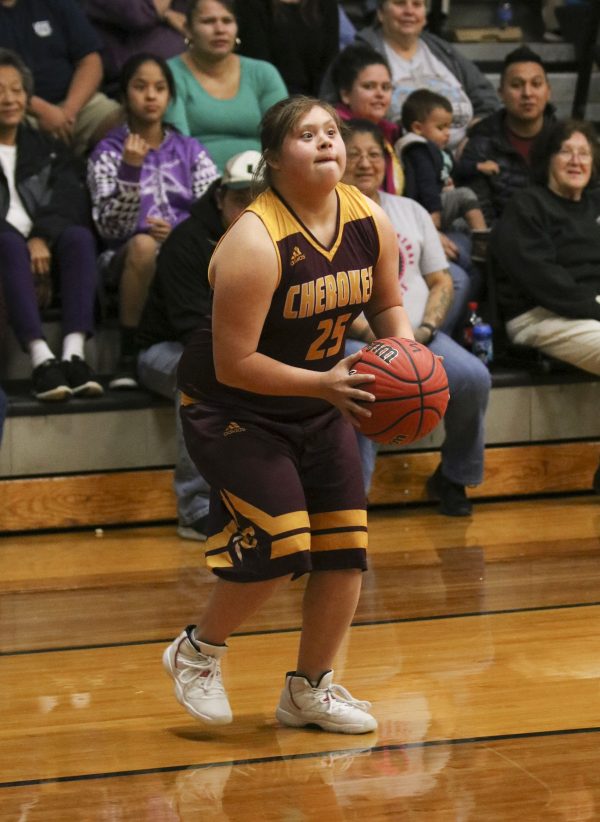 Jacee Smith (#25), Lady Braves senior, prepares to shoot during a game at Robbinsville on the evening of Friday, Jan. 25. (SCOTT MCKIE B.P./One Feather)

Late in a game at Robbinsville on Friday, Jan. 25, a Cherokee Lady Braves player took a pass from a teammate, turned, dribbled once, and drilled a 15-foot shot, and the crowd on both sides went wild.  It was a scene that has played over and over last season and this season, and the player responsible is a superstar – #25, Jacee Smith.

“I like basketball and I like making the three pointers,” Jacee told me after the Robbinsville game in which she scored 4 points.  “I love the girls and I love (Coach) Mintz.  I want to tell my fans thank you.  I love you, and I love my family.”

Smith started her love of the game and her career at the age of 6 playing for the Birdtown Community recreation team.  Several years later, she joined a travel league team.  After taking her middle school years off from the game, she returned last year as a junior on the Lady Braves team.

“Her playing basketball just proves that we don’t really have any excuses to sit around and not do anything,” said Raymius Smith, Jacee’s older brother.  “If she wants to get up and she wants to get active, then that just pushes us because if she can do it, why can’t we?  We’ve always held her to the same standard as anybody and mom and dad raised us to treat her the same.”

Basketball is a family affair for the Smiths who are present at all of Jacee’s games.  “I just love to see the other fans,” said Timmy Ray Smith, Jacee’s father.  “It makes my heart feel good that people cheer for her.  It just makes us feel good, it really does.  It’s brought us a lot closer to a lot of things because of her.”

When Jacee enters a game, the mood of the gym changes – instantly.  Even during contentious games, when she comes onto the court, people cheer and when she scores the place falls down.  I asked Timmy Ray his thoughts on this and he said, “We’re at a time right now where this country is divided…I think it just gives people hope that our society can be better.”

He spoke of a recent road game for the Lady Braves that got very heated and contentious, especially among the fan bases, “But, when she got in there they were all cheering for her and that made me feel good.”

Chris Mintz, Lady Braves head coach, said that Jacee brings life to the team. “Our girls love her and can’t wait for her turn to get on the court.  There always comes that time when all the girls start saying ‘put 2-5 in, put 2-5 in’.  And, when she stands up, they go crazy as do our fans.  It’s always so much fun when she gets in and to see her face when she scores is priceless.  It’s been a joy to coach her, and it’s been fun, because our families are close, to see her grow from travel league to the high school game.”

He went on to say, “I’m so glad I’ve had the chance to be around her and enjoy how everyone responds to her.  All the other teams have been so gracious when playing us.  That really shows sometimes things are more important than the score.”

Ben Stamper, who has coached Jacee since she was little, commented, “Her dad and I went to school together and we’re like brothers so to be able to coach her has been a privilege.  Even when she was tiny, they’ve never treated her like she was different so she’s always been included in everything.  Their family is very sports-oriented, so, of course, it was natural for her to play.”

He is currently an assistant coach with the Lady Braves team and is enjoying being able to coach her at this level.  “I can hold her attention like no one, and I don’t know why.  She will listen to me before she’ll listen to anyone else.  I guess that’s from coaching her since she was really little – teaching her how to shoot, teaching her to dribble, teaching her how to pass.  We never treated her like she was any different.  Her parents didn’t want that.”

Stamper added, “It’s been a journey watching her grow as a person, and it’s special watching her look at her dad when she scores.”

Around the gym, she can be seen talking to her fellow players, coaches, fans, and, well, everyone.  “She doesn’t meet a stranger,” said Timmy Ray.

Raymius added, “She’s in the happiest mood always.  She just cheers everybody up no matter if you’re having a bad day, just her coming around you just makes you feel better.”

Jacee is on the Lady Braves team with her younger sister, Naomi, who commented, “It’s very exciting when she goes on the court…she gets excited when she makes the threes.”

Jacee is a superstar human and we all need to strive to be more like her.  Most of us will fail, but if we strive to be even 10 percent the person she is, this world will be markedly better.  Keep playing, Jacee!