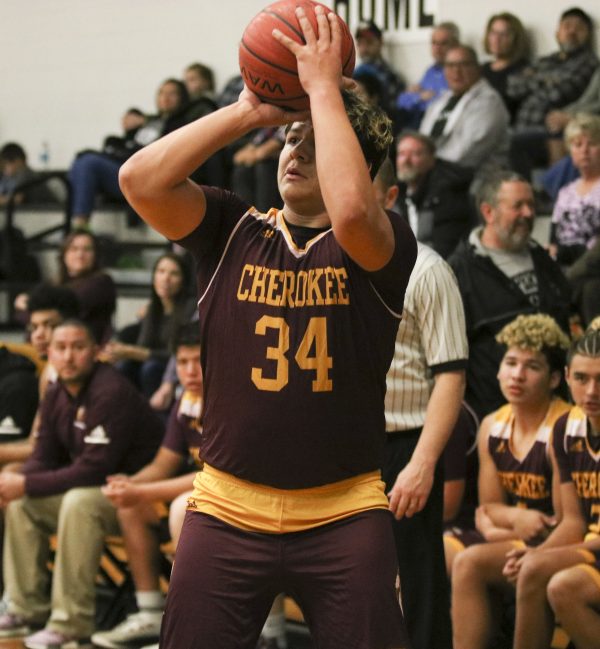 Sterling Santa Maria, Braves junior, shoots a three-point shot during the second half of a game at Robbinsville on Friday, Jan. 25. With 23 points, he led Cherokee to a 59-51 victory and scored his 1,000th career point in the third period. (SCOTT MCKIE B.P./One Feather photos)

ROBBINSVILLE – Sterling Santa Maria, Braves junior, hit a shot in the third period of a game at Robbinsville on Friday, Jan. 25 that was a milestone for him and helped his team win their sixth game of their last seven.  The shot was Santa Maria’s 1,000th career point, and he led the Braves with 23 points on the night as Cherokee overcame a fourth period deficit to defeat the Black Knights 59-51.

The Braves were 3-8 earlier in season and have now pulled to 9-9 (.500) on the season and are tied for second place in the Big Smoky Mountain Conference with Andrews.  “We had a really tough non-conference schedule and were playing some really good teams,” said Aaron Hogner, Braves head coach.  “A lot of our guys’ roles changed from last year as far as being more aggressive and more assertive offensively.  Defensively, we had to tighten some things up.”

Coach Hogner said his team is getting more confidence as the season progresses.  “They are buying into each other and starting to figure out what their job is and what their roles are, and they’re just grinding them out.” 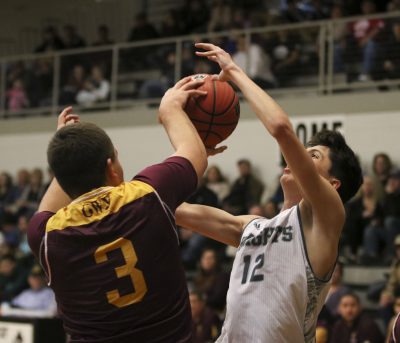 Both teams started slowly on Friday with the Braves holding a 9-7 lead after the first period.  Robbinsville led 20-19 at the half and 41-37 after three.  The Black Knights actually led by as many as 8 points early in the fourth period when the Braves staged a comeback and won by 8.  Coach Hogner said he was pleased with their performance and noted, “Our biggest problem all year has been that our energy level needs to stay consistent.  We just need to come out ready to play.  We come out too complacent sometimes and we’re looking for someone else to take over.  When we come out with high energy and everybody’s moving, everybody’s sprinting, everybody’s hustling, then things look good for us.”

When asked about reaching his milestone, Santa Maria said, “It feels really good.  I’ve been working towards it since freshmen year, and I’m just trying to work hard every day, get better, make shots.”

Known for his precise outside shooting, Santa Maria said, “I like to shoot the long balls, but when I get an open lane, I like to take the free lay-ups.”

He is happy with the turn-around for the Braves as well.  “It’s getting better.  Our practices are getting harder and better.  We’re working harder and getting faster-paced.  We got in a hole and had to dig ourselves out.”