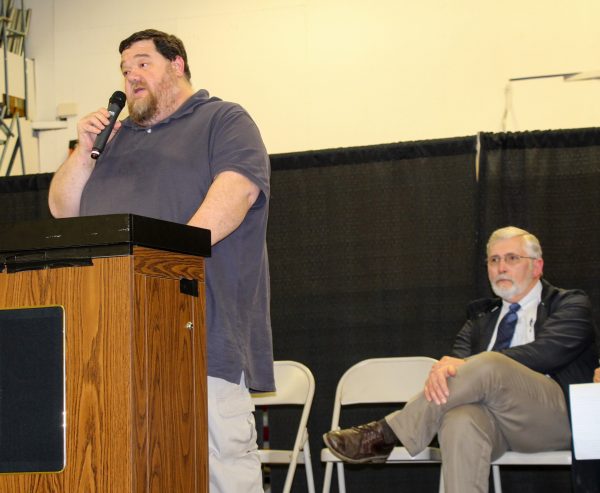 Tribal leaders hosted a Town Hall Meeting at the Cherokee Indian Fairgrounds on the evening of Thursday, Jan. 24 to discuss and provide information to the public on the CEDS (Comprehensive Economic Development Strategy) of the Eastern Band of Cherokee Indians (EBCI).  Organized through the Office of Vice Chief Alan B. Ensley, the meeting delved into the top five projects of the CEDS including: Adventure Park, Trout Hatchery Research and Education Center, Sequoyah National Golf Course Hotel and Clubhouse, Multi-Sports Complex, and a Tribal Archive.

“When you go into communities, it’s hard to explain what all of these projects are and how they come to be, the CEDS projects,” said Vice Chief Ensley.  “So, we wanted to have a town hall meeting to give a good explanation to the general public on how all of the projects come about.”

Principal Chief Richard G. Sneed welcomed everyone to the meeting and noted, “We’re trying to create processes that we follow so that projects don’t just hang around for a decade or longer.  So, the CEDs list does that and the Capital Outlay Projects list does the same.” 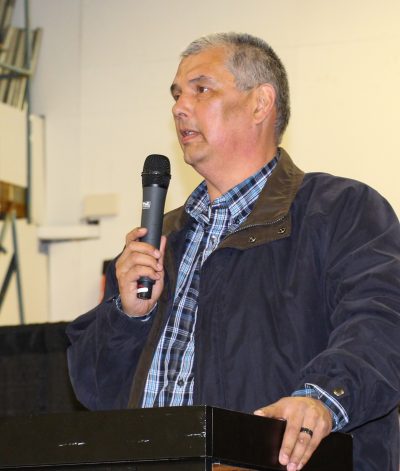 Vice Chief Alan B. Ensley welcomes everyone to the meeting. His office was instrumental in organizing the event.

“The Tribe has maintained a Comprehensive Economic Development Strategy for at least 20 years,” Cole said who related that it originated with a grant from the EDA (U.S. Economic Development Administration).  “We must have a five-year economic development strategy on file and approved by them.  It is very important to have this document in place because if we ever apply for other grants or anything like that the first thing they’re going to say is ‘where’s your CEDS?'”

Cole said the current CEDS was approved by the Tribal Planning Board and then, subsequently, by the Tribal Council.  Prior to that approval, community discussions were held at various community clubs and input was sought from elders at Tsali Manor as well as from the Community and Culture Advisory Committee and others.  “The goals of the CEDS are to increase destination tourism, commercial and retail development, revenue diversification, and small business and entrepreneurship.  So, each of the projects was judged for consistency with those goals and community impact.”

Several proposals have been discussed over the years for the Adventure Park which was first brought forth as an idea in 2002.  The current incarnation idea involves a 113,000 square foot indoor water park with a 405-room resort hotel and restaurant.

Owle discussed the Trout Hatchery and noted that a feasibility study for a new facility was conducted in 2016 by the Freshwater Institute under the Conservation Fund.  “What this feasibility study looked into was our current trout hatchery production, limitations, repairs and what it would take to bring that facility up to a standard more to our liking.  There’s a lot of repairs that need to take place with the administrative building, the egg incubation area, the feed storage, the raceways, and that total cost came to about $4.2 million.”

Cole said the feasibility study for the Sequoyah National Golf Course, which opened in August 2009, was the first project he worked on as a tribal planner.  “Even though its January and in the middle of winter, the course still looks just absolutely beautiful…it’s a very great asset, but it could be a greater asset.”

He said the Sequoyah National Golf Club Board thinks having a better clubhouse and an added hotel would improve the quality and overall numbers.  Cole noted that a feasibility study was conducted, “And, indeed, it stated that a 125-room hotel at the Golf Course would be very, very successful.”

Peggy Hill, an EBCI tribal member from the Yellowhill Community, questioned the prioritization of those selected to be in the CEDS list.

On the golf course project, she agrees with the idea of building a clubhouse but questions a hotel and noted that other courses frequently have houses or condominiums surrounding the property.  ‘Why are we not developing the land around the golf course?” 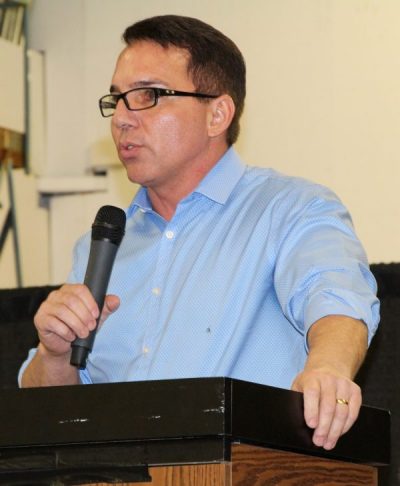 Lisa Montelongo, an EBCI tribal member from the Yellowhill Community, also questioned the prioritization of the list.

Cole said this is the fourth CEDS he’s worked on and noted, “This is, by far, the most people we’ve had at our community meetings.  There was in excess of 50 people at each one of them, and we got some good feedback…before the Planning Board, they went before the advisory committees, the elders, and we took them to community meetings and those were presented to Tribal Planning Board.”

He went on to discuss the Multi-Sports Complex, “A lot of people are coming into town for sports tournaments – basketball, softball, etc. – and the idea there would be to develop a complex where these people could come…this is one that we need to do a little more feasibility work because I think we may have an issue with the number of hotel rooms available in town that would be able to accommodate these people.”

Cole said the preliminary site for that Complex is the old Cherokee High School site off of Acquoni Road in the Yellowhill Community.  “A lot of preliminary work needs to be done there – some archaeological work, flood plain work, etc.”

Daniel Tramper, an EBCI tribal member who owns Deer Clan Productions, asked if the Complex could possibly be a multi-use facility that could also host other events such as pow wows, horse events, or truck shows.

“Yes, we will certainly look into it,” said Cole, “but, at this point in time we’re in the feasibility arena…it’s not at a point where we can drive a stake in the ground and say ‘this is what it’s going to be used for’.”

The Tribal Archive is the fifth project on the CEDS list and was part of a Memorandum of Agreement between the Tribe and the National Park Service in a land exchange involving the Ravensford Property where the Cherokee Central Schools is currently located.  The Archive, per the agreement, was to be completed in 2009.

“It turned into the largest archaeological project in North Carolina history,” Townsend said of the work done at the site prior to construction of the new school. “Because, underneath that old logging town and hay fields was 8,000 years of human history preserved better than you could ever imagine.  There were 11 burned house structures which you almost never get…it gives us an unparalleled picture at what Cherokee life was like in different points in history.”

A site for the Archive has not been selected yet, but Townsend said various locations have been discussed including the old Cherokee High School, the old Cherokee Elementary School, and a spot near the Kituwah Mound.  He added that the archaeology team that worked on the original project has housed the artifacts free of charge – never costing the Tribe a dime to this point.

Townsend said that following a feasibility study in 2005, it became apparent that EBCI tribal members didn’t just want a curatorial facility but one that would also house historical government documents.  “What this was originally going to be, and what we agreed for it to be, is a curatorial facility to contain hundreds of hundreds of thousands of artifacts of Cherokee past in a space that could accommodate 10,000 cubic feet.”

After some discussion from various community members on the process to approve the CEDs list, McCoy stated, “We have to create a process to get these projects approved from A to Z.”

Chief Sneed concluded the meeting by fielding some questions and explaining costs associated with some of these projects.  During a recent meeting with Cleveland County Commissioners in Shelby, he asked them about their construction costs who related it costs around $150 per square foot to build in their area.  Chief Sneed related that in Cherokee, the cost is around $320 to $380 per square foot.  “There’s a lot of reasons for that – site development because we’re in the mountain, TERO adds to that; Wolftown Community Club, $320 a square; Birdtown Community Club, $320 a square.  That’s exorbitant.  That’s a lot.”

Vice Chief Ensley said the next Town Hall Meeting, which will be held in July, will be devoted to health and medical issues as well as more explanations of the Tribe’s finances.