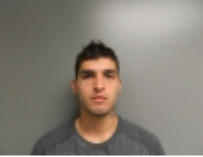 Dustin Corey Jones, 26, of Cherokee, was taken into custody following an armed stand-off in the Rough Branch Community on Friday, Jan. 18.  According to information released by the EBCI Division of Public Safety, Jones barricaded himself with a firearm.  Cherokee Indian Police Department officers were dispatched to the scene and secured the area.

Jones was taken into custody and charged with Obstructing Governmental Functions and Violation of a Court Order as well as Failure to Appear on a Misdemeanor.  No one was injured in the stand-off.