HAYESVILLE – The Cherokee Lady Braves are 13-2 on the season, atop the Big Smoky Mountain Conference, and are ranked third in the state (1A) in the Maxpreps.com poll that was released on Friday, Jan. 18.  Their latest win came on Friday at Hayesville as they defeated the Lady Yellow Jackets 74-56.

“I thought we were pretty solid,” Chris Mintz, Lady Braves head coach, said after the game at Hayesville.  “There were times when we played really good, and then there were times when we struggled a little bit.  But, we play a lot of players, and it’s hard to keep up our pace for a whole game.  Teams will usually have a stretch where they stop scoring and we keep going.” 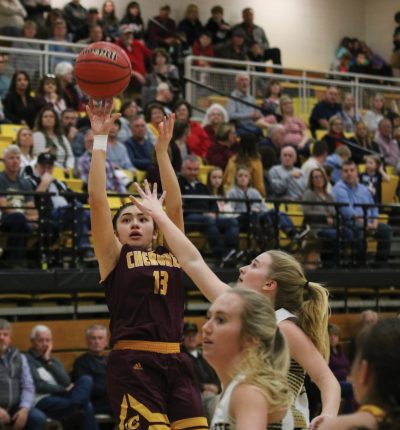 Cherokee’s Deante Toineeta shoots over several Hayesville defenders in a game on Friday, Jan. 18 at Hayesville. With 31 points, she led the Lady Braves to a 74-56 victory. (SCOTT MCKIE B.P./One Feather)

Deante Toineeta led Cherokee with 31 points on the night followed by Tori Teesateskie with 15.  This game opened up pretty even as both teams traded baskets in the early minutes.  Cherokee led 16-11 after the first period.  The second period remained tight, and the Lady Braves took a 37-30 lead into the locker room.  In the second half, Cherokee opened it up and led by 10 (53-43) after the third and then outscored Hayesville 21-13 in the final period to take the big win.

Coach Mintz said he’s happy with how his team has performed to date and added that they’re always improving.  “We set little goals for them to do such as this week it was go to 3-0 (the Lady Braves won in the week over Highlands, Robbinsville, and Hayesville) and we’ve got a five-game stretch with all of the really tough conference teams that we have to face.  Next week is huge for us.  We’ve just been working along and trying to keep getting better every day.”

He said they’re working on some things specifically.  “We’ve got to stay out of foul trouble.  We’ve been in foul trouble the last three or four games.  We also have to work on not turning the ball over and making sure to take good shots.”

The Lady Braves host the Murphy Lady Bulldogs at the Charles George Memorial Arena on Tuesday, Jan. 22 and then travel to the Robbinsville Lady Black Knights on Friday, Jan. 25.