ON THE SIDELINES: NCHSAA addresses fans’ behavior towards referees

There’s not a single high school football or basketball game that I attend where there’s not at least one fan yelling at the referee over a call.  This is just a fact of life in modern-day high school sports, and it’s nothing new.  But, officials at the North Carolina High School Athletic Association (NCHSAA) addressed this issue recently and are posing it as a major reason referees are leaving the games – literally.

“When you attend an athletic event that involves your son or daughter, cheer to your heart’s content, enjoy the camaraderie that high school sports offer and have fun,” reads an op-ed piece submitted to papers statewide written by Karissa Niehoff, National Federation of State High School Associations executive director, and Que Tucker, North Carolina High School Athletic Association commissioner.  “But, when it comes to verbally criticizing game officials or coaches, cool it.  Make no mistake about it, your passion is admired, and your support of the hometown team is needed.  But, so is your self-control.  Yelling, screaming, and berating the officials humiliates your child, annoys those sitting around you, embarrasses your child’s school and is the major contributing reason North Carolina is experiencing a shortage of high school officials.” 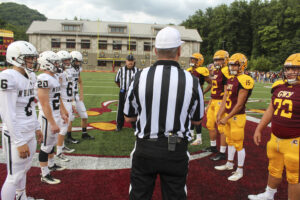 Referees line up the team captains for the coin toss at a game between Cherokee and North Buncombe at Ray Kinsland Stadium on Aug, 17, 2018. (SCOTT MCKIE B.P./One Feather)

In an email that came along with the op-ed, Tucker states, “…research shows that 80 percent of all young officials quit after just two years on the job because of the verbal beating they get.  And, much of that abuse is coming not from high school coaches or athletes, but from overly-competitive, overly-ambitious parents who have set unrealistic visions of their sons’ and daughters’ future as a collegiate or professional athlete.”

First off, I’ve written several times before that I admire the job of the referee.  It’s something that I could never do nor would I ever want to even try.  I always go back to a quote from Tripper (Bill Murray) in my favorite movie “Meatballs”, “Somebody’s gotta do it, and it can’t be me!”

There’s not one game that I go to where the referees don’t get a call wrong – not one.  But, to be fair, there are also many, many times where the referees get the call right only to hear fans screaming about it.  Being on the sidelines gives me a pretty good view of the game, and I can truly see who the ball was out on or if a defender truly blocked the ball during a shot or fouled the shooter.

My daughter used to play roller derby which is a very rough sport as you might think.  I used to think that sport was insane as they didn’t have sanctioned referees for the bouts.  Each team was responsible for providing referees.  Sometimes, it worked…other times, it didn’t work that well.  But, while I’m certainly not advocating for anything so drastic as that, maybe they’re on to an idea.

Maybe in prep sports it is time for each team to provide a referee-watcher for lack of a better term.  This person’s sole responsibility would be to keep an eye on the officiating and any challenges or questions from coaches would be vetted to the head official through this person.  That might cut down on the amount of technical fouls teams get when coaches approach referees.

That wouldn’t address the fan, parent issue.  But, short of increasing security and really cracking down on what is said at games, I’m not sure you will ever curb that behavior.

In the end, the players and coaches just want a fair game, and I feel this issue needs to seriously be addressed in the off-season by NCHSAA officials.  It is obviously on their radar enough that they write an op-ed…now, solutions need to be discussed – something other than telling parents and fans just to be on their best behavior.  Go into a Cherokee vs Swain County game and tell the fans, “Ok everyone, I want you to cheer in a well-mannered way at the appropriate times designated.”  Right.

While their op-ed and this column don’t necessarily begin to solve the problem, and it is truly a problem if 80 percent of new referees are quitting due to this issue, I feel any time problems are discussed openly and honestly there is a better chance of finding a true solution.

It would seem so Sir Alex.