The Bureau of Indian Affairs’ Cherokee Agency remains closed. Great Smoky Mountains National Park still is denying access to facilities, and volunteers have been picking up trash at the Oconaluftee Visitor Center. With more than 800,000 federal employees trying to get by without a paycheck during the federal government shut down, federal employees who are tribal members can get some relief from their tribal government.

Principal Chief Richard G. Sneed issued a statement offering assistance to those tribal members. “If you are an enrolled member who works for the federal government and you have been furloughed, please call my office for assistance during this difficult time. We want to make sure that your needs are met until you are able to return to work.” 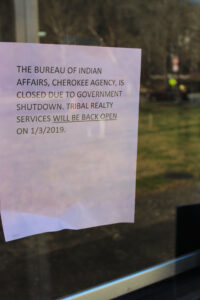 The Bureau of Indian Affairs’ Cherokee Agency remains closed due to federal government shut down. The agency’s employees can get assistance from the Principal Chief’s office. (JOSEPH MARTIN/One Feather)

The shutdown, which has drawn criticism from Native American advocates and two Native American Reps. Deb Haaland (D-N.M.) and Sharice Davids (D-Kan.), has impacted tribal services in some locations. All called for government to reopen and restore services.

“Like many New Mexicans, I know what it’s like to rely on food assistance to feed my family, and it’s important that we get a full understanding of the effects this government shutdown will have on those benefits,” said Haaland. “The House passed a bill to fund the government on day one. We owe it to families in New Mexico to solve this crisis and ensure federal workers receive their paychecks.”

Davids said that federal workers in her district are bearing the burden for political dysfunction through no fault of theirs. “Our civil servants and contractors need to support their families, and we need to make sure they get paid for the important work they do.”

United South and Eastern Tribes President Kirk Francis said, “This shutdown must end now as political gamesmanship has real life negative consequences to native and non-natives alike. Furthermore, the time has arrived for the United States to prioritize its commitments to Indian Country by taking the necessary steps to fully fund its obligations to Indian Country and to make all Indian Country funding non-discretionary by moving it to the mandatory/entitlement side of the federal budget as an advance appropriation across the board. Only then can the United States truly state that it is honoring its promises and fulfilling its obligations.”

Other native advocacy organizations called for the shutdown to end, citing numerous negative impacts to tribes. Representatives of the National Congress of American Indians, Native American Contractors Association, Winnebago Tribe of Nebraska, National Council on Urban Indian Health, National American Indian Housing Association, National Indian Child Welfare Association and Self-Governance Communication & Education Tribal Consortium all signed a letter to President Donald Trump, Senate Majority Leader Mitch McConnell (R-Ky.), Senate Minority Leader Chuck Schumer (D-N.Y.), Speaker of the House Nancy Pelosi (D-Calif) and House Minority Kevin McCarthy (R-Calif.). “We urge you to immediately end the partial government shutdown. The shutdown breaks the treaty and trust obligations to tribal governments. Agencies that provide critical government services to our nations are caught up in unrelated politics over funding for a southern border wall and the well-being of our tribal citizens hangs in the balance,” it stated. “America’s longstanding, legally mandated obligations to tribal nations should be honored no matter the political quarrels of the moment. Ironically, the Americans most affected by immigration over the last 500 years continue to be the most heavily impacted by the shuttering of multiple federal agencies that are unrelated to securing the homeland. Our communities rely on federal funding to administer key tribal government services, health care facilities, public safety, housing access, nutrition and food distribution programs, and social services. The shutdown is destabilizing these programs and causing fear and anxiety and fear among our members.”