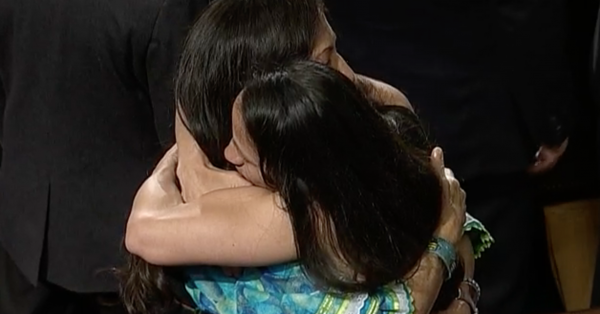 Deb Haaland, (D-N.M.) and Sharice Davids (D-Kan.) embrace after being sworn in to the House of Representatives. Public domain photo.

Eastern Band of Cherokee representatives went to the capitol to witness the swearing in and to meet with Davids and Haaland.

Haaland issued a statement saying, “I can’t wait to bring New Mexico values to Congress. As the representative for the families in the state’s first congressional district, I will be an advocate for renewable energy jobs to protect our land, air and water, a fighter to expand opportunities for our kids and a champion for equity.”

Davids’ addressed the public. “I’m really looking forward to making sure that people remember the history of our country and also the present, that people keep in mind that we’re still here, and that our voice is really important, and that we need to have native issues, concerns and all the good stuff that’s happening in Indian country to be acknowledged, heard and seen in congress and on the executive side, and we’re here to make sure that happens.”

Collin Price, public relations officer for the Ho-Chunk Nation, attended the event. “(It was a) super exciting, really proud moment.” Price said it was good to see the native youth embracing Davids, and the mood of her tribe was one of enthusiasm. “We’re seeing people who normally don’t, show up for events.”

Tribal Council Wolftown Rep. Jeremy Wilson was part of a, Eastern Band of Cherokee Indians contingent to attend the event. He said the event signified a new era for America, not just for Native Americans but for women as well. “I had the opportunity to be a part of history, and the atmosphere in Washington this trip was different than my previous trips. Even amidst the government shutdown, there was a strong sense of hope, and an overwhelming sense of support for both Deb and Sharice.”