President Donald Trump’s insistence that the federal budget include $5 billion for a wall at the Mexican border has led to a government shut down as members of congress disagree over the funding for the project. However, in a region where the federal government has a heavy presence, the lack of paychecks for federal employees and lack of funds to keep federal programs operating has a significant impact.

Locally, the U.S. Public Health Service’s Commissioned Corps and Indian Health Service, both operated under U.S. Health and Human Services, provide health care services at the Cherokee Indian Hospital. The U.S. Department of Agriculture’s Forest Service operates the Oconaluftee Job Corps. The Department of the Interior oversees both the Bureau of Indian Affairs (BIA) and National Park Service. All have been negatively impacted by the shutdown. 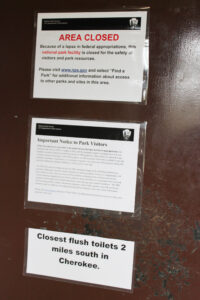 While national parks have been accessible, facilities have been closed, like restrooms and visitor centers. This restroom sign at the Great Smoky Mountains National Park Oconaluftee Visitor Center urges people to travel two miles south to use restrooms in Cherokee. (JOSEPH MARTIN/One Feather)

Calls to the BIA are answered by a voicemail prompt stating, “Our office is currently closed due to government shut down.”

But having to go without pay or not reporting to work is only part of a potential problem with the park service. While donations from organizations have allowed the park’s Oconaluftee visitor’s center to open, until Jan. 2, U.S. 441, it has been closed since then. The Blue Ridge Parkway is also closed. While facilities have been kept in order with the park, other national parks across the country have reported overflowing garbage and piles of human waste with no one taking care of it. On Jan. 3, visitors attempting to enter the visitors center or use the restrooms were turned away with signage stating that the facilities were closed due to a lapse in funding.

Principal Chief Richard Sneed said the Tribe should be largely unaffected in the short term. “The (Eastern Band of Cherokee Indians) EBCI takes measured and thoughtful steps to ensure we are insulated from events such as federal shutdowns. The effects of a short-term federal shutdown are quite minimal, and the EBCI is well equipped to continue providing services to negate the impact on enrolled members.”

However, Chief Sneed said a long-term shut down could cause a disruption in services. “A long-term shutdown would affect funding for health services the EBCI provides, regulatory oversight on construction and permitting, and the ability of the EBCI to be awarded new grant funding or access funding that has already been awarded.  I will work with each of the EBCI secretaries to ensure the impact on employees and enrolled members is minimal.”

Secretary of Housing Travis Smith said right now there are no short term affects to his division. “The only governmental contacts we have would be with the HUD office and this would only be effected if we were unable to drawdown funding for this program. We have some reserves to carry us through such times as these with no effect to the customers or employees. I have not been made aware of any other issues short or long term to date.”

At the hospital, Chief Executive Officer Casey Cooper said that shutdowns have occurred in the past and that tribal leaders have built reserves to prevent political and economic volatility from negatively impacting services. Cooper said federal employees at the hospital will continue to work, and they’ll continue to get paid. “We currently have less than a dozen civil servants contracted from the Indian Health Service working for the Cherokee Indian Hospital Authority (CIHA). While assigned to CIHA these civil servants are required to work regardless of the ‘shut-down,’ but because we pay the government for these employees and we pay the government in advance, these employees do not have to work without pay. At this time the CIHA does not anticipate any disruptions in services as the Indian Health Service appropriation now represents approximately one-third of total revenue for the CIHA, and the CIHA has managed to build responsible levels of cash reserves in anticipation of this very situation.”