COMMENTARY: Sen. McCain’s service is something we all should strive to mirror

“Do not despair of our present difficulties but believe always in the promise and greatness of America, because nothing is inevitable here,” said the late Sen. John McCain (R-Ariz.)

I’ve always appreciated McCain’s service to our country, both his time in the military and his service in the senate. Those of us with military families know the impact of service. It’s tough. It’s a lot of time away from mothers and fathers, and as a young boy I went through that. I still remember the sounds of Fort Campbell, Ky. with Hueys chopping overhead.

I also appreciated McCain’s support of Indian Country. For the most part, he stood with tribes, and that’s likely how many tribes would like to remember him.

American Legion Steve Youngdeer Post 143 Cmdr. Lewis Harding, who flew the same combat missions as McCain over North Vietnam, described him as a cowboy. That was a reputation that would continue into his service as an elected official. He was willing to buck his own party for the greater good up until the day of his death. 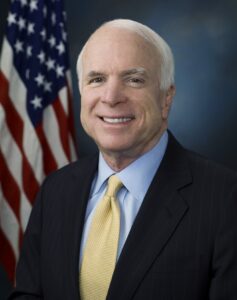 In his last year of life, McCain should most be remembered for his challenging of the Trump White House. It’s not so much for his opposition to President Trump. It’s more about his rejecting the toxicity and accompanying politics that led to Trump’s rise to power.

McCain’s unconventional public service as a politician, which included rebuking a voter’s suggestion that Barack Obama was an anti-American Muslim, that really makes him stand out.

McCain comes from a time when we could have civil discussions without it turning personal. We could agree to disagree, and that was it. His friendships with Sens. Joe Biden, Hillary Clinton, Ted Kennedy, people with whom he had major disagreements politically, confirm that.

I often think about this when I look at our tribal government. Too often differing interests or differing positions on issues turn to ad hominem attacks and unwarranted, baseless accusations. Too often it mirrors what is currently coming out of the White House.

We need to be better than this. No good comes from destructive attacks designed to do little more than tear each other down in efforts to discredit any debates on the issues. And I admit that at times, I’ve been guilty of this. At times, I’ve looked back on some of my writings and felt I could’ve worded things more constructively, even while maintaining the firmness of my position.

McCain has supported tribes in the past, including this one in its quest to obtain the Ravensford property for the new Cherokee Central Schools. We can honor his memory by returning to civil discussions over our issues and reaching out to those who oppose us to work together for the greater good.

Let’s stop the practice of demonizing those with whom we don’t agree. Let’s put aside and forgive past transgressions against others. Finally let’s reject the politics of division and reach out to each other, listen to each other, and build a better tribe.

I’ll just leave this part of McCain’s final statement here, “We have always had so much more in common with each other than in disagreement. If only we remember that and give each other the benefit of the presumption that we all love our country, we will get through these challenging times. We will come through them stronger than before.”