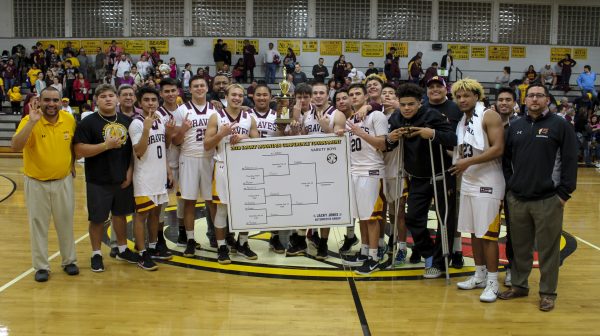 CHAMPS: The Cherokee Braves won the Big Smoky Mountain Conference tournament with a 90-78 win over Rosman in a game held at Murphy High School on the evening of Friday, Feb. 16. (SCOTT MCKIE B.P./One Feather photos)

MURPHY – The Cherokee Braves (16-5) won the Big Smoky Mountain Conference tournament with a 90-78 win over the Rosman Tigers on the evening of Friday, Feb. 16 at Murphy High School. The Braves, who also won the outright regular season conference title, went undefeated in conference play on the season. On the same night, the Lady Braves (16-6) lost to Murphy 62-55 and were the runner-up in the conference tournament.

“We played well,” Aaron Hogner, Braves head coach, said after Friday’s game. “We had two tough games. It’s hard beating teams three times in a row. Murphy gave us a tough game. These guys (Rosman) played us tough. The Thomas brothers can shoot. Containing them was hard, but these guys toughed it out. They kept playing. They kept their composure and hit shots when we needed them to. Defensively, they stepped up and we rebounded better in the second half. And, that helped us to keep the lead.”

Following a first-round bye, Cherokee edged Murphy 64-62 in the tournament semi-finals before facing Rosman in the finals on Friday. 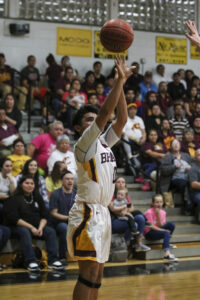 JUMPER: Cherokee’s Tihjah Lossiah, who led the Braves with 21 points on Friday against Rosman, lines up for a jump shot in the first half.

In the finals, there were four Braves in double-digits including Tijhah Lossiah 21, Tye Mintz 18, Josiah Lossiah 18, and Sterling Santa Maria 18.

Coach Hogner is happy with where his team is stacking up heading into the upcoming state playoffs. “We’ve got to continue to do things and utilize our speed and our bench. The last two games we really picked up our defensive pressure, and that’s how we are going to have to play in the tournament. We will have to keep guys on their toes because it is one-and-done. We just have to survive and advance.” 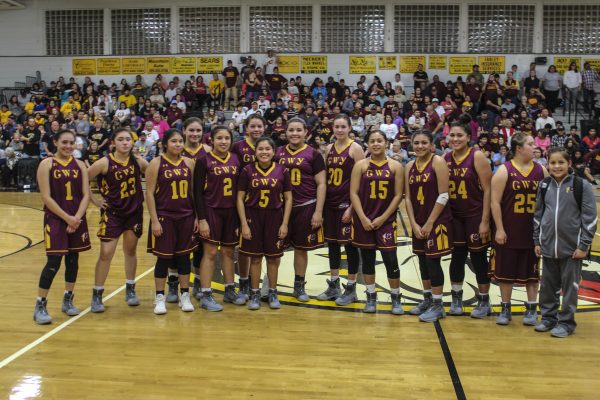 RUNNER-UP: The Cherokee Lady Braves took second place in the Big Smoky Mountain Conference tournament with a 62-55 loss against Murphy. They defeated Andrews and Robbinsville to advance to the finals on Friday.

The Lady Braves tied with Murphy for the regular season title, but a coin toss in the Lady Bulldogs favor gave the Lady Braves the number two seed in the tournament. In the first round, Cherokee defeated Andrews 70-39 and followed that up with a semi-final win over Robbinsville 60-55.

“The tournament has been a battle for us,” Chris Mintz, Lady Braves head coach, said after Friday’s game. “We scraped by Robbinsville and then we played a heck of a team tonight in Murphy. We played on their home court in a really big-time environment with people standing in the hallways to watch the game. It was an impressive tournament for us to be able to play in front of these crowds and get ready for the state playoffs.” 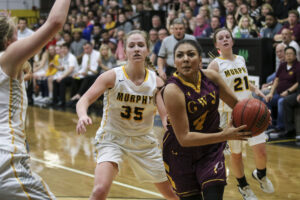 DRIVING: Cherokee’s Carla Wolfe (#4) drives toward the basket through several Murphy defenders including Sydni Addison (#35) and Ellie Martin (#21). On the night, Wolfe had 13 points.

Like the previous two meetings of the Lady Braves and the Lady Bulldogs this season, Friday’s game was a back-and-forth contest. Murphy jumped out to an early 6-2 lead, but Cherokee tied it at 8-8 at the 3:30 mark of the first quarter. Less than a minute later, Cherokee’s Carla Wolfe, who finished the game with 13 points, made a layup to give the Lady Braves their first lead (10-9) of the game. Cherokee kept up the pressure and ended up leading 23-12 at the end of the first.

For the first six minutes of the second period, the Lady Braves went cold and were outscored 17-0 by the Lady Bulldogs who led 29-23 with just over two minutes left before the half. In the last minute of the second, Cherokee’s Tori Teesateskie, who had 14 points on the night, hit two crucial three-point shots and the Lady Braves only trailed by one point (32-31) at the half.

Murphy kept a slight lead through the third and led 45-40 going into the fourth. Cherokee was unable to close the gap in the fourth and Murphy took the 62-55 win.

Coach Mintz noted his team is ready for the state playoffs. “Our matchup between Murphy for the last couple years has become like Duke and North Carolina – everybody’s must-see. That atmosphere, being able to play in those big games, and us win half of them and them win half of them is making us better. We got better this week and we’re going to be better for it. We can catapult ourselves into making a run. We can make a five-game run. We’re good enough to do that. We just have to put it all together.”