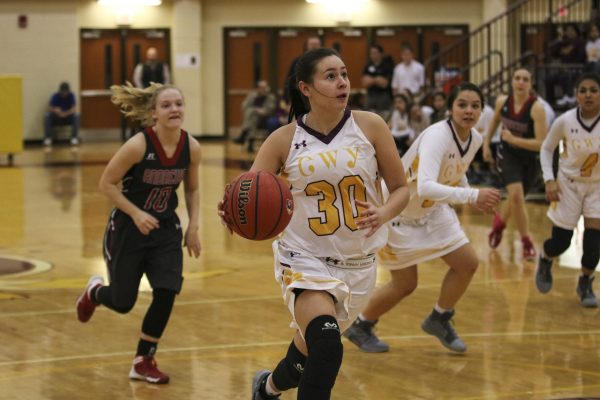 BIG NIGHT: Cherokee’s Tori Teesateskie (#30) brings the ball up the court in a game at Charles George Memorial Arena on the night of Tuesday, Feb. 6. With 23 points, she led the Lady Braves over the Andrews Lady Wildcats 102-38 and, in the process, scored the 1,000th point of her career. (SCOTT MCKIE B.P./One Feather photos)

The Cherokee Braves (16-3) and Lady Braves (14-5) both finished their regular season atop the Big Smoky Mountain Conference.  Following wins over Andrews at the Charles George Memorial Arena on the evening of Tuesday, Feb. 6, the Braves won the Conference title outright, finishing their regular season perfect in conference play, and the Lady Braves shared the title with Murphy.

Both teams won big with the Lady Braves topping the Lady Wildcats 102-38 and the Braves winning 90-68. 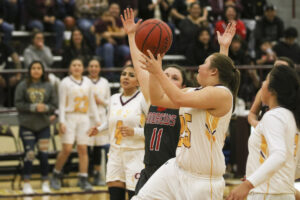 ELECTRIC: Cherokee’s Jacee Smith (#25) goes for a shot in the second half of Tuesday’s game. She electrified the crowd with 11 points including three from three-point land.

Winning a share of the Conference means a lot to the team noted Coach Mintz.  “To start out the season 2-4 and having people think we weren’t all that good, it’s been nice to prove to them and the doubt that they had.  It’s been exciting.”

Tori Teesateskie, Lady Braves junior, led the way on Tuesday night with 23 points including five from three-point land.  The night was also a milestone for her and Holden Straughan, Braves senior, who both hit the 1,000 point mark for their career.  On the night, she also had 5 rebounds, 2 assists, and 4 steals.

Teesateskie said winning a share of the Conference title is “amazing”, but she noted it’s just the start.  “We’re not done.  We still have to work.  We have a lot to work on, but I feel like we have a really good chance of going to state this year.  We just have to keep working hard.”

The Lady Braves led the entire way on Tuesday.  After jumping out to a 31-9 lead after the first quarter, they led 59-17 at the half.  Due to their lead, the clock ran for the majority of the second half according to the NCHSAA mercy rule.  Cherokee got a lot of bench play in the second half including a stellar performance from Jacee Smith who came on and scored 11 points including three three-pointers.

For the game, the Lady Braves shot 47.4 percent from three-point land making 18 buckets. 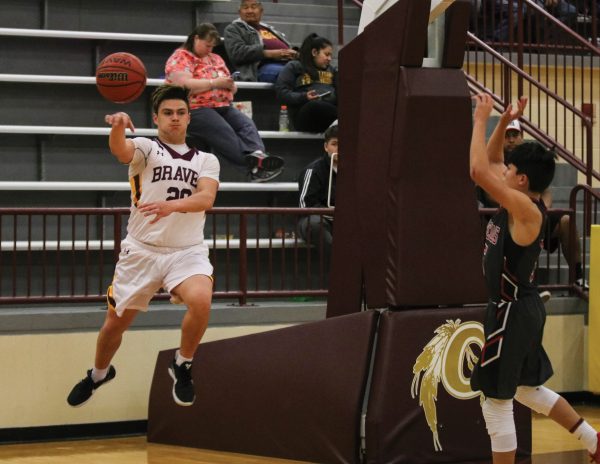 MR. HUSTLE: Never giving up, Cherokee’s Holden Straughan leaps out of bounds to save a ball in the second half of Tuesday’s home game against Andrews. With 30 points, he led the Braves over the Wildcats 90-66 scoring the 1,000th point of his career along the way.

The Braves won their thirteenth in a row and shot 49.3 percent overall and 44.4 percent from three-point land.

“It feels good,” Aaron Hogner, Braves head coach, said of winning the Conference regular season title.  “I’m glad the guys got to enjoy it.  It’s good for these guys.  Three coaches in three years, that’s got to be tough on them mentally, but for them to come out and do what they’re doing is really special and shows a lot of character about who they are and their maturity.”

In the past few weeks, Coach Hogner said his team has been improving on the court each day and each game.  “We’ve been working on scrambling more on defense and buying into that.  We’re going to be a lot smaller than the teams down state – Lincoln Charter, Winston-Salem Prep – if we meet up with them so we’re really going to have to use our speed and do little things differently to disrupt their offense.”

The game started closer than it ended with the Braves grabbing a 23-16 lead after the first quarter and leading by 11 points (40-29) at the half.  But, another big third quarter for the Braves (32 points) put them up to stay as they were able to go on for the big 90-66 win.