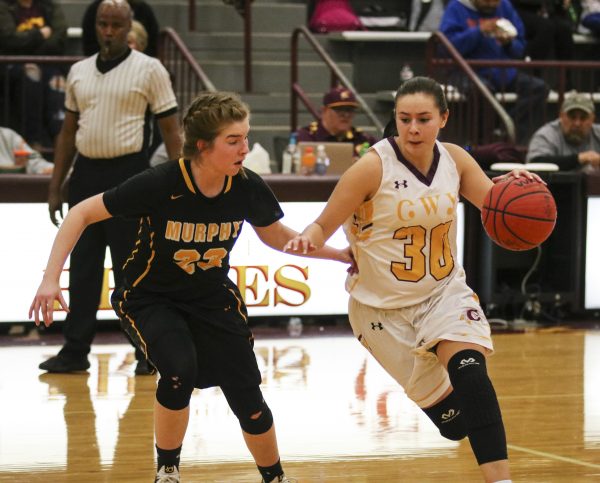 DRIVING: Cherokee’s Tori Teesateskie (#30) drives inside against Murphy’s Aubrey Clapsaddle during a game at the Charles George Memorial Arena on the evening of Monday, Feb. 5. With 20 points, Teesateskie led Cherokee to a 76-67 win over the Lady Bulldogs. (SCOTT MCKIE B.P./One Feather photos)

Before a packed house in the Charles George Memorial Arena, the Cherokee Lady Braves (13-5) topped Murphy (21-2) on the evening of Monday, Feb. 5.  With the win, Cherokee moves into a tie for first place in the Big Smoky Mountain Conference with the Lady Bulldogs.

“I thought we played really well,” said Chris Mintz, Lady Braves head coach.  “We were composed.  We came out on fire to start the game, and then we just kept rolling.  We shot the ball well tonight.  We handled the ball well.”

He praised his team’s tenacity, “They never quit and played hard in the fourth quarter.  We stayed composed, and Murphy finally starting missing some shots and we were able to rebound them.”

Coach Mintz commented on the importance of the win, “This was huge for us with what it will mean going into the conference tournament and playoffs.  To have a share of the conference title is huge.” 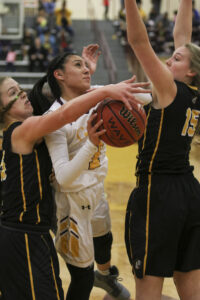 The Lady Braves were led by Tori Teesateskie with 20 points followed by Raylen Bark 19 and Deante Toineeta 14.

Cherokee came out gunning in the first and led by 13 points (28-15) at the end of the quarter which saw very few stops in action.

Cherokee came out for the third and built their lead to 51-42 a few minutes in.  They led by as many as 12, but the Lady Bulldogs edged back in again and only trailed Cherokee 64-58 going into the fourth quarter.

The last quarter was tight until the last minute.  Cherokee led 69-65 with just over three minutes left.  Down the stretch, Murphy missed some inside shots and was forced to foul the Lady Braves as time waned.  Cherokee led 71-65 with just over a minute left, and after hitting some key foul shots in the last minute were able to take the 76-67 win.