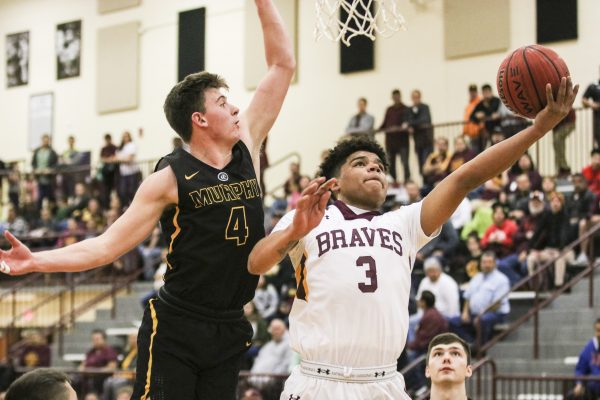 FINESSE: Cherokee’s Justus Day (#3) goes for a finger roll layup around Murphy’s Hagan Newton in a game at the Charles George Memorial Arena on the evening of Monday, Feb. 5. With 20 points, 3 rebounds, and 3 assists, Day helped lead the Braves past Murphy 85-65. (SCOTT MCKIE B.P./One Feather photos)

The Cherokee Braves (15-3), who have already clinched the Big Smoky Mountain Conference regular season title, are still unbeaten in conference play as they beat Murphy 85-65 in a game at the Charles George Memorial Arena on the evening of Monday, Feb. 5.  A big second half helped lift the Braves over the Bulldogs (14-7).

“We didn’t practice Friday, and we came out a little flat,” said Aaron Hogner, Braves head coach.  “It took us awhile to get into a groove, but you have nights like that in basketball – it’s such a long season.  We had some good sides; some guys picked it up defensively.  The first half, I think giving them two or three shots per possession was hurting us and allowed them to stay close.  But, we came out in the second half and took care of business.”

Cherokee was led by Tye Mintz with 21 points, 9 rebounds, and 2 steals followed by Justus Day with 20 points, 3 rebounds, and 3 assists.

The first half was close the entire way.  Cherokee led 8-5 after three minutes in the first, but Murphy came back and grabbed an 11-10 lead with just over two minutes left.  From there, the Braves went on a 6-1 run to lead 16-12 at the end of one. 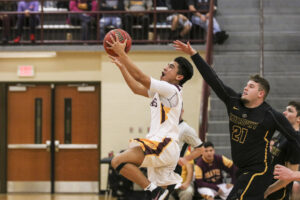 FLYING: Cherokee’s Tihjah Lossiah defies gravity as he soars ahead of Murphy’s Curt Brown for a layup in the second half of Monday’s game against Murphy.

The Braves led by seven (34-27), their biggest lead of the first half, with 3:25 left before the half.  Murphy was able to cut into the lead a little and trailed Cherokee 41-38 at the half.

Holden Straughan, Braves senior, hit a reverse layup with three minutes left in the third quarter to put Cherokee up by 11 (59-48) which was their first double digit lead of the night.  They continued to build upon that lead extending it to 21 points (71-50) at the end of the third.  Straughan finished the game with 15 points, 3 rebounds, 4 assists, and 1 steal.

Cherokee was able to get a lot of bench play in the fourth quarter and went on to take the 20-point win (85-65).

Coach Hogner said his team is ready for tournament and playoff games.  “I think the guys feel good,” he noted.  “It’s been a different season with the snow days and us getting started so late, so we haven’t really gotten into a regular schedule.  So, us having a couple of days off to get ready for the tournament is really going to help these guys out.”