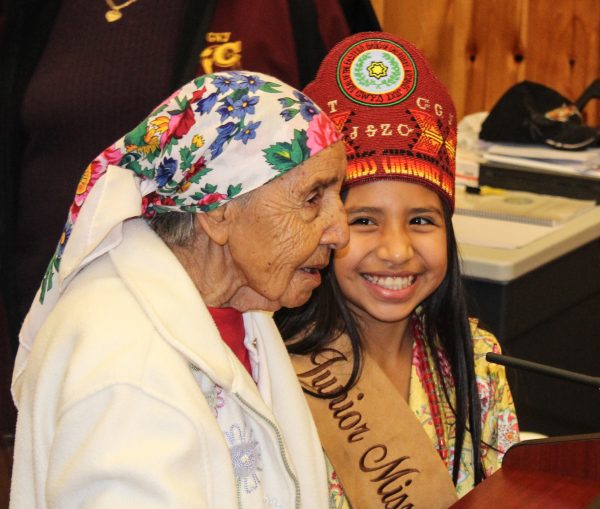 Amanda Swimmer, noted potter and fluent Cherokee speaker, has received numerous awards and honors for her artwork over the years.  Now, the Eastern Band of Cherokee Indians has given her the highest honor by bestowing the title of Beloved Woman upon her.

Tribal Council bestowed the title onto Swimmer with the passage of Res. No. 104 (2018) during its regular session on Thursday, Feb. 1.  The resolution, submitted by Big Cove Rep. Richard French, was passed unanimously. 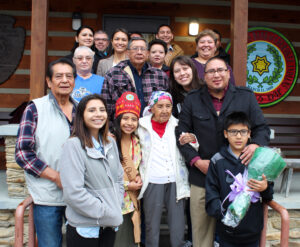 FAMILY: Multiple generations of the Swimmer family gather outside of the Council House following Amanda Swimmer (first row, center) being named a Beloved Woman of the Eastern Band of Cherokee Indians.

The resolution reads in part, “Amanda Sequoyah Swimmer, a member of the Big Cove Community, has dedicated her life to the preservation of the Cherokee culture and language by demonstrating and teaching countless children and adults the art of pottery making, serving as a foster grandparent, sharing stories and knowledge of traditional Cherokee dances and practices to anyone willing to learn…”

Following passage of the resolution, Swimmer commented to the crowd, “I’m glad I’m still here and talking to you Council members.  You look pretty.  Stay pretty and do the right thing that you should do for the people.  And, put the Lord first in everything you do.  Don’t leave him out.  He’s going to show you what you have to do.  He’s shown me a lot of times, and he’s in my heart.”

Some of the previous recognitions given to Swimmer include: North Carolina Heritage Award (1994), honorary doctorate degree from UNC – Asheville (2005), Mountain Heritage Award (2009), and being included in an exhibition of Folk Heritage Award-winning potters (2014).  She was also one of three women featured in a 2000 Native Heritage Project documentary entitled “Women of These Hills” in addition to being featured, along with other Cherokee potters, in a 2011 book by Anna Fariello entitled “Cherokee Pottery: From the Hands of Our Elders”.

After the resolution was read into the record, a letter from the Swimmer family was read detailing more of her life’s accomplishments.

Rep. French noted, “All of that explains everything, why I think she deserves this award and honor – all she’s done.” 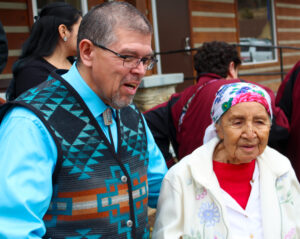 RESPECT: Big Cove Rep. Richard French (left) is shown talking with Beloved Woman Amanda Swimmer outside of the Council House on Thursday. Rep. French submitted the resolution to bestow the honor on Swimmer.

Big Cove Rep. Perry Shell said, “I don’t think there’s anyone more deserving of this award who has had an effect on this Tribe; not only her, but her family, her children, and the legacy.”

Of the legacy Swimmer’s family has had on the Tribe, Rep. Shell stated, “It’s had a direct, positive impact on the people of the Eastern Band of Cherokee, and I want to thank Amanda for her life and her devotion to our people…you’ve represented us well, and thank you for leading and guiding and correcting Council through your wisdom and your directness and begin a strong, Cherokee woman.”

Swimmer was quoted in the Folk Life Program of the North Carolina Arts Council in 2009 as saying, “I always think about my old ancestors, and I ought to just keep going and keep making pottery and teaching others to make pottery.” 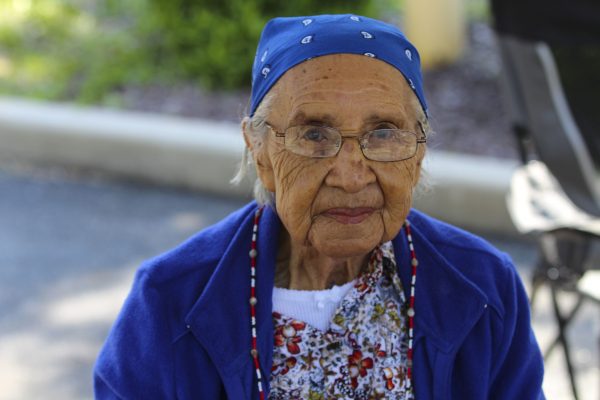 POTTER: EBCI Beloved Woman Amanda Swimmer is shown at the 20th Annual Cherokee Voices Festival at the Museum of the Cherokee Indian on June 10, 2017 where she demonstrated her techniques for making pottery.