ON THE SIDELINES: The Braves embody team unity

I take a lot of photos on the sidelines of games each season, but every now and then one of my photos really strikes me.  After the Braves vs Thomas Jefferson game on Friday, Nov. 24, I took a photo of the Braves players holding their helmets up after their post-game talk and prayer.

I’ve taken photos of that before, but that particular moment really hit home for me.  During the post-game talk by Kent Briggs, Braves head coach, and during the prayer by John Mitchell, fans from the opposing team were taunting the Braves.  But, the Cherokee players remained steadfast.  They remained calm.  They remained unified.  They put their helmets up in unity, and at that moment, it dawned on me.

That’s why they have been so successful this year! 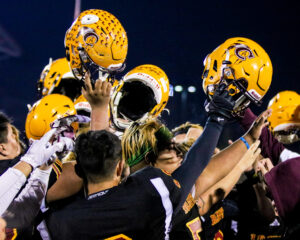 I watch a lot of sports, I mean a lot of sports, and commentators are always trying to figure out why this particular team was successful or why this team is not doing as well.  It almost always deals with the “Xs and Os” chalkboard analysis of games and on-field work.

But, I feel that, many times, the unity of a team is overlooked.

He would know…six rings can’t be wrong.

Teamwork, team unity, comes from being intelligent and noticing that to win you have to be a team.  You must work together, especially in a sport like football.  Tye Mintz, Braves senior quarterback, is one of the best all-around players I’ve ever had the privilege of covering.  That being said, he would be much less effective if his offensive line didn’t block for him.

Unity is everyone working for the same goals with the same thought processes in mind – no one more important than another.  In actuality, a team is just a small community and the most successful communities are those which don’t forget the last part of the word – unity.

Pubilius Syrus, a Latin writer born in 85 BC, once wrote, “Where there is unity, there is always victory.”