Mintz leads Braves over Gryphons; Cherokee on to regional final 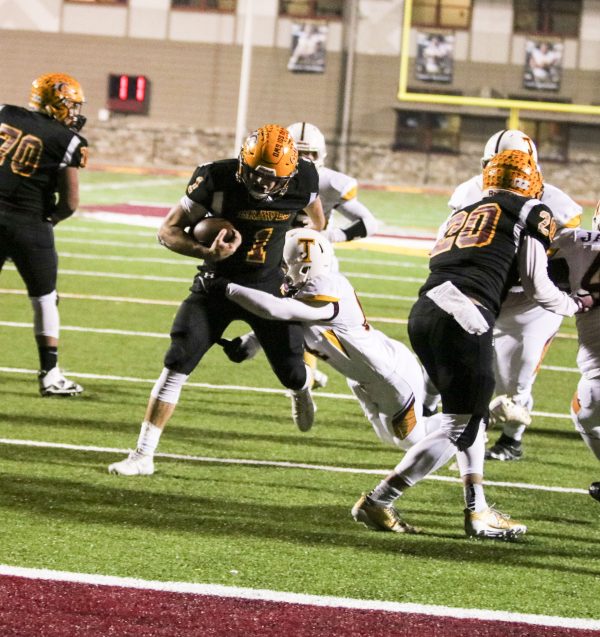 SCORE: Tye Mintz (#1), Braves senior quarterback, breaks a tackle en route to a touchdown run in the first half of a regional semi-final game against Thomas Jefferson at Ray Kinsland Stadium on Friday, Nov. 24. On the night, Mintz accounted for 433 total yards of offense including six rushing touchdowns and one passing touchdown. (SCOTT MCKIE B.P./One Feather photos)

Tye Mintz, Braves senior quarterback, accounted for 433 total yards and seven touchdowns as Cherokee (12-1) bested Thomas Jefferson (11-2) by a score of 47-20 in a regional semi-final game at Ray Kinsland Stadium on the chilly evening of Friday, Nov. 24.  Mintz ran for 363 yards on 14 carries and six touchdowns and completed 4 of 12 passes for 70 yards and one touchdown.

“We came out with the right intensity to be physical and to execute, and we came out and did those two things,” said Kent Briggs, Braves head coach. “We played a really good football team.  They have 11 wins…I thought we went out there and executed at the key times of the game.  Our guys stayed confident the whole game.  We made sure that we did what we needed to do to win the game.”

With the win, the Braves will travel to Mitchell on Friday, Dec. 1 at 7:30pm for the regional championship with the winner going to the state championship the following week.  “Mitchell is a great football team with a great program,” said Coach Briggs.  “We know Mitchell.  They know us.  I feel very good about going up there and playing.  We’ve been there before so we’re experienced in that situation.  It will be a very challenging game, but at the same time, we put ourselves in this situation to go win a regional championship, and our guys will be fired up I’m sure.” 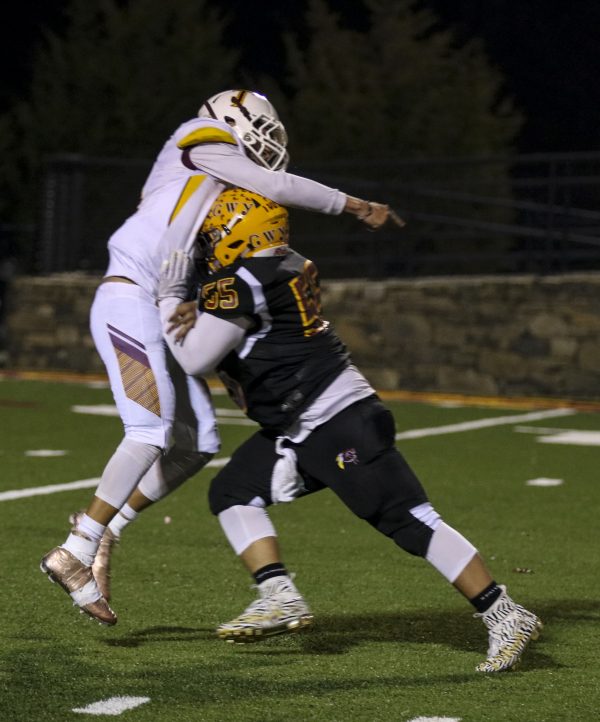 Turnovers played a huge part in the game with Thomas Jefferson having six (three fumbles, three interceptions) and Cherokee just having one fumble.  Will Davis, Braves senior defensive tackle, led Cherokee with eight tackles followed by Byron Locust with seven.  Blake Smith had 3.5 tackles and two interceptions on the night.

Nomi McMullens, junior quarterback, led the Gryphons with 101 yards on 16 carries and one touchdown.  He also completed 13 of 26 passes for 171 yards, two touchdowns, and three interceptions. 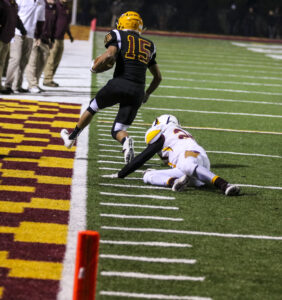 PICK: Cherokee’s Blake Smith (#15), junior defensive back, runs up the sideline after intercepting a ball. On the night, he had two picks as Thomas Jefferson turned the ball over six times.

The Braves jumped out to an early lead in this game with two rushing touchdowns (56 and 88 yards) by Mintz in the first quarter.  A few minutes into the second, he added another score on a 6-yard run to give Cherokee a 21-0 lead with just over seven minutes left before the half.

Three minutes later, the Gryphons got on the board as McMullen threw a 14-yard touchdown pass to Shamar Petty.  The point after failed, and the Braves led 21-6.

The Braves got on the board one more time before the half as Mintz ran 54 yards for another score to make it 28-6 at the break.

Four minutes into the second half, Mintz took off on another long run – this time an 85-yard score to extend Cherokee’s lead to 35-6.

Thomas Jefferson made it interesting however and scored two times in a row.  McMullens connected with Stephen Hargett on a 64-yard touchdown pass at the 7:08 mark of the third.  The point after was blocked, and the Braves led 35-12.  Not quite two minutes later, the Gryphons would get into the end zone again as McMullens ran 22 yards for the score.  He then found Petty on the two-point play to make it 35-20 with 5:31 left in the third. 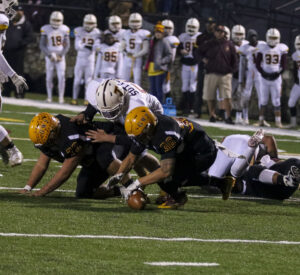 I’LL TAKE IT: Damian Blanton (#36), Braves junior linebacker, pounces on a loose ball in the second half. On the night, the Gryphons lost three fumbles to Cherokee’s defense.

But, that was the end of Thomas Jefferson’s scoring on the night.

Three minutes later, Mintz connected with Cade Mintz on a 46-yard touchdown.  The point after failed, and the Braves took a 41-20 lead into the final quarter.

With 3:51 left in the game, Mintz scored his sixth rushing touchdown of the game on an 84-yard run.  The kick failed, and Cherokee led 47-20 which is how the chilly game would end.

As stated, the Braves will travel to Mitchell for the regional championship.  The Mountaineers (12-1) beat Robbinsville 45-25 in the regional semi-finals.